The internet gasps at Trump’s ‘appeasement’ of Putin’s election interference: 'This president is completely owned' 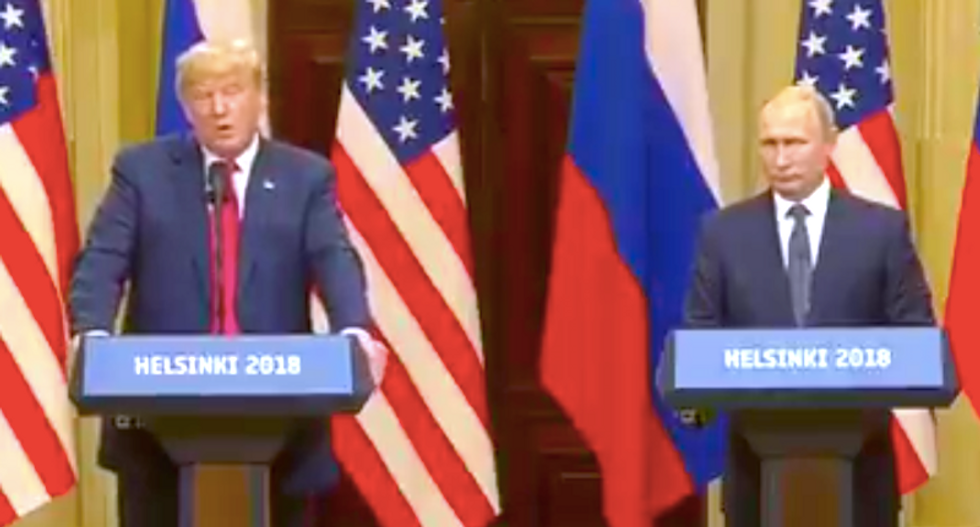 Putin insisted after a two-hour private meeting with Trump that he did not order election hacks, despite the findings of U.S. intelligence and law enforcement agencies and the indictment last week of 12 Russian intelligence officials.

Trump praised Putin as a "good competitor" and criticized Democrats and the media for alleging collusion between his campaign and Russia, and Twitter users were astonished at the display.

Is Putin actually trying to suppress a grin as Trump says there was no collusion and discusses his victory over Cli… https://t.co/t5XDyS5kgj
— Joyce Alene (@Joyce Alene)1531755480.0

Has there ever been a more humiliating press conference for an American President?
— Tom Wright (@Tom Wright)1531755667.0

Trump is lying right now about not knowing Putin before the election. He bragged about knowing him in 2014. https://t.co/EuBBKIT4eD
— Sarah Kendzior (@Sarah Kendzior)1531755510.0

Putin is completely in command of this situation. He’s basically told Trump to go piss up a rope about the GRU guys… https://t.co/7fimvUMvml
— Tom Nichols (@Tom Nichols)1531755991.0

Trump saying “there was no collusion” while standing next to Putin is a gift to documentary filmmakers for years to come, so there’s that!
— Miriam Elder (@Miriam Elder)1531755476.0

Trump repeats his refrain that there was “no collusion.” Worth remembering that his son, son-in-law and campaign ch… https://t.co/Umu0B4x1jV
— Peter Baker (@Peter Baker)1531755497.0

Remember when we heard screams for months about how Obama went on an apology tour? https://t.co/OYLyYHvjrj
— Bradley P. Moss (@Bradley P. Moss)1531755369.0

Will serious Congressional Republicans still truly sit back and say nothing following this POTUS performance on the… https://t.co/fvF3bTM0m9
— Chuck Todd (@Chuck Todd)1531755576.0

This is truly insane! The Russians invaded our election and the American president yanmers about what a brilliant… https://t.co/EAGbeGdtc9
— David Axelrod (@David Axelrod)1531755626.0

If you needed any other evidence that this President is completely owned, you just got it.
— Rick Wilson (@Rick Wilson)1531756344.0

The President is standing next to a murderous Russian dictator, and sucking up to him, while throwing the entire U.… https://t.co/bEFlxxaHeW
— Ken Tremendous (@Ken Tremendous)1531756527.0