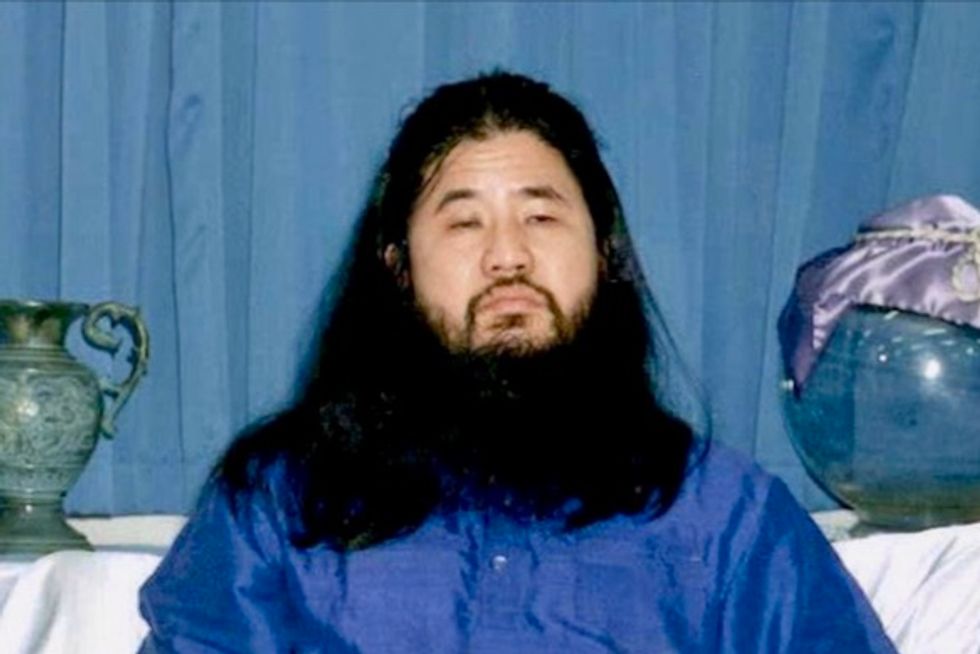 Asahara once led up to 10,000 followers, including some who in 1995 targeted the Tokyo subway in a shocking chemical attack that killed 13 people and injured thousands more AFP/File / JIJI PRESS

The leader of the Japanese doomsday cult that carried out a deadly 1995 sarin attack on the Tokyo subway was executed Friday along with six of his followers, decades after the horrific crime.

Shoko Asahara, the charismatic near-blind leader of the Aum Shinrikyo sect, had been on death row for more than ten years for crimes including the nerve agent attack, which shocked the world and prompted a massive crackdown on the cult.

Japan's Justice Minister Yoko Kamikawa confirmed the seven executions, saying the Aum members were responsible for "extremely atrocious and grave acts that were unprecedented and should never happen again".

The hangings are the first executions in connection with the attack, which killed 13 people and injured thousands more. A further six cult followers remain on death row.

Japan is one of the few developed nations to retain the death penalty, and public support for it remains high despite international criticism.

Relatives of those killed in the attack, and others who were injured welcomed the executions.

AFP/File / Junji KUROKAWAThe attack during the capital's notoriously crowded rush hour paralysed the Japanese capital, turning it into a virtual warzone as injured people staggered out of the underground struggling for breath and with watering eyes

"I reacted calmly... But I did feel the world had become slightly brighter," said Atsushi Sakahara, a film director who was injured in the sarin attack at Tokyo's Roppongi station.

"It will be impossible to ever forget the incident, but the execution brings a kind of closure."

Shizue Takahashi, whose subway worker husband was killed in the attack, told reporters she felt Asahara's execution was entirely appropriate.

"He of course deserves death," she told reporters.

"The execution was processed as it should be... so no tears for me at all."

The attack during the capital's notoriously crowded rush hour paralysed Tokyo, turning it into a virtual warzone.

Members of the group released the chemical in liquid form at five points through the subway network, and soon commuters began struggling to breathe, staggering from trains with their eyes watering.

Others keeled over, foaming at the mouth, with blood streaming from their noses.

Sakae Ito, who was on the crowded Hibiya line that day, recalled commuters coughing uncontrollably.

"Liquid was spread on the floor in the middle of the carriage, people were convulsing in their seats. One man was leaning against a pole, his shirt open, bodily fluids leaking out."

Panic soon set in, with subway workers screaming at people to evacuate and passengers convulsing on carriage floors.

Japanese Self-Defense Force members dressed in hazmat suits and gas masks descended into the depths to help the injured and deal with the poison.

Though concerns about the Aum had already been raised, the attack prompted a massive crackdown on the cult's headquarters in the foothills of Mount Fuji, where authorities discovered a plant capable of producing enough sarin to kill millions.

Asahara was sentenced to death after a lengthy prosecution during which he regularly delivered rambling and incoherent monologues in English and Japanese.

Born Chizuo Matsumoto in 1955 on the southwestern island of Kyushu, he changed his name in the 1980s, when the Aum cult was being developed.

A charismatic speaker, he cloaked himself in mysticism to attract recruits, including the doctors and engineers who manufactured nerve agent for the group.

The Aum cult, now renamed Aleph, officially disowned Asahara in 2000, but it has never been banned and experts say the former guru retained a strong influence.

Despite the horror that persists over the Aum's subway attack and other crimes, some experts had warned against the execution of Asahara and his acolytes.

They said his death could trigger the naming of a new cult leader, possibly his second son, and his followers could be elevated to the status of "martyrs" among remaining adherents.

Japanese authorities said they were on alert for potential retaliation after the executions and local media reported police were visiting groups linked to the Aum and successor cults.

Friday's hangings were the largest simultaneous execution in Japan since 1911, when 11 people were hanged for plotting to assassinate the emperor.

They were criticised by rights group Amnesty International, which described the cult's acts as "despicable" but said "the death penalty is never the answer".