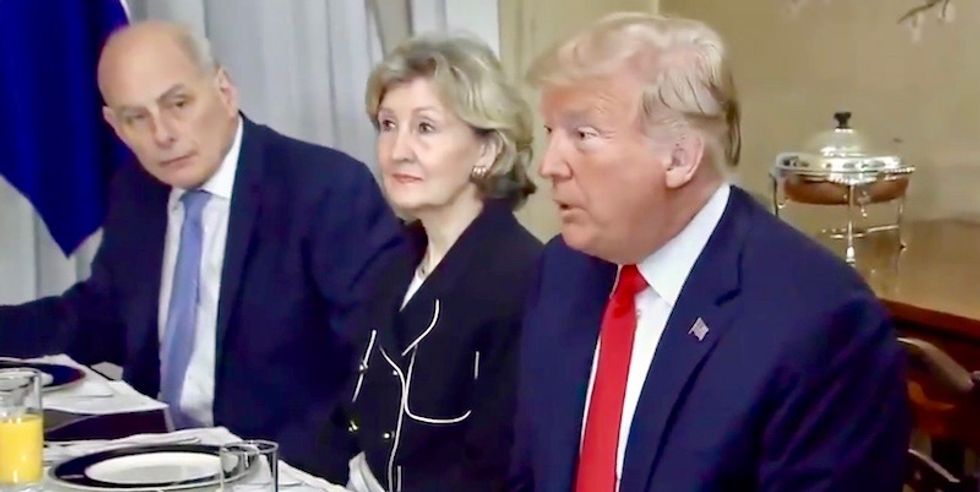 Donald Trump opened his visit to Europe with a perfect presidential touch, describing our close ally Germany as being "totally controlled by Russia" because it buys natural gas from the Kremlin.

"Right out of the box he shows the world how stupid he is," tweeted best-selling author and veteran intelligence operative Malcolm Nance.

Some others are trying to put an intellectual veneer on Trump's words, claiming that the rant was actually a trenchant observation about German energy policy in the wake of policies pursued by former German Chancellor Schroeder.

But the best reaction has to be Chief of Staff John Kelly, who was seated near Trump.

Kelly looked like a deer caught in the headlights, then turned his eyes down to the table and blinked in apparent disbelief before turning his body away from the president as though he was contemplating making an escape.

Quite interesting to watch John Kelly's face in the background as Trump says that "Germany is totally controlled by… https://t.co/oACmPwNvR8
— Kyle Griffin (@Kyle Griffin) 1531308608.0

Immediately next to Trump sat NATO ambassador Kay Bailey Hutchison, a former Texas senator, whose look was described as "stricken."

US ambassador to NATO @kaybaileyhutch looks stricken sitting next to Trump as he says "Germany is totally controlle… https://t.co/gTKsA6Kzkh
— Michael Birnbaum (@Michael Birnbaum) 1531309084.0