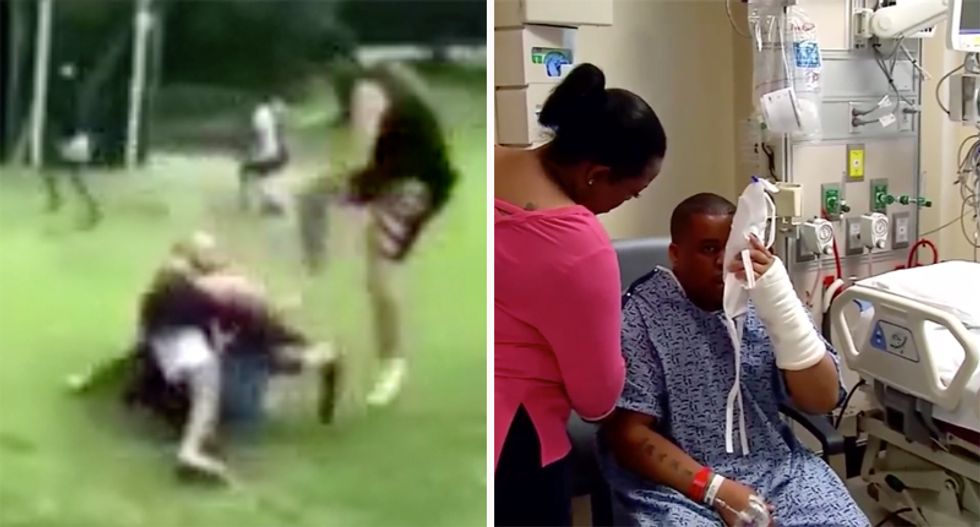 At the Wave Country water park, a brawl involving 40 people broke out between a white family and black family over the weekend.

Tyrone Holt, in an interview from his hospital room, explained how his eye socket and hand were broken in the racial melee.

"They tried to gang me, so I just started trying to defend myself. Next thing I knew, I was on the ground, kicked and punched," Holt said.

On Monday, doctors will install a metal plate in Holt's face to hold his skull together.

Holt said he's disappointed that police did not press charges against his attackers.

The brawl occurred after three black girls told their parents that a white man called them racial slurs after bumping into them in the swimming pool.

Jonathan Sellers' disagrees with that account, saying it was the black family using racial slurs.

"They had their kids throwing stuff at us, calling us white trash this and that, and all kind of craziness," Sellers said.

The water park said they are launching an internal investigation into the brawl.

"We are very concerned about the incident that took place at Wave Country on Saturday," Wave Country said in a statement. "The safety and well-being of our customers is our highest priority."

This has been a contentious summer of racial strife at American swimming pools.

Stephanie Sebby-Strempel, known as "Pool Patrol Paula" was fired from her job after striking a 15-year-old in a racial incident at a South Carolina swimming pool. She also bit the officer arresting her.

An off-duty cop and apartment manager made the only African-American at a pool leave -- even though he lives there.

A physician and her family posted video of them being called a “black b*tch” and “n****r" at a Florida pool.

Swimming pools have long been scenes of segregation and racism.

Professor Jeff Wiltse, the author of the book Contested Waters: A Social History of Swimming Pools in America, explained the history.

"For nearly a century, blacks and whites have mostly swum separately from one another," Prof. Wiltse noted. "Gender integration was a direct cause of racial segregation. Most whites did not want black men interacting with white women at such intimate public spaces."

"In the many places where residential segregation persists, however, blacks and whites still swim separately. This is especially apparent at private club pools and private community pools," he noted. "They mostly remain sites of whites-only recreation, even though their racial exclusivity today results more from economic inequality, residential segregation, and the legacy of past discrimination than from overt acts of present-day discrimination."