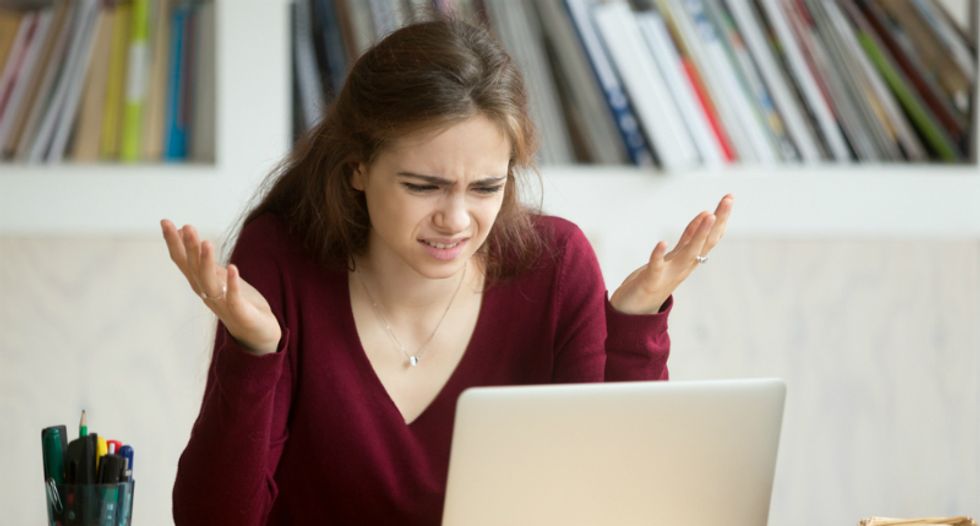 A woman throws her hands up in annoyance as she looks at a laptop screen. Image via Shutterstock.

For women on Twitter, unwanted male attention is as rampant online as it is in the physical world. But a specific subset of male users, known half-jokingly as "reply guys" due to their propensity for replying to prominent women in pseudo-flirtatious terms, have concocted new ways to bother, challenge and otherwise take up women's time.

They can be found in the replies to any tweet posted by a Twitter-verified female journalist, as well as those of many others who aren't endorsed in such a way by the website. They come in three general forms: the overly-familiar men attempting (and failing) to flirt; the layman attempting (and failing) to challenge the ideas of professionals; and the men who insist on mansplaining a woman's own ideas back to them.

As veteran journalist Amanda Marcotte told Raw Story, these types of men have been using the internet in their strides to establish rapport with reporters for as long as the web has existed.

"I've been a figure online for so long that I got these guys even before there was Twitter," she said. "Then they would email you, demanding that you correspond to them. Sometimes they would insist on a 'debate' and other times it was just that they wanted to chat at length. Either way, it was rooted in this sense that they were entitled to ask for extensive amounts of attention and emotional labor from a complete stranger."

Christina, a young lawyer and sometimes-host on Mic Dicta, a leftist legal podcast, has a high number of reply guys on par with her nearly 15,000 Twitter followers. She noticed her first reply guys when she had only 500 people following her.

"I would notice the same guys responding and I was like, why is this happening?" Christina, who asked that her last name be withheld, told Raw Story. "How did you FIND me?"

Reply guys don't just come in categories, as the lawyer's experience suggests — they also have personal quirks as variable as those of anyone else on Twitter.

Her reply guys run the gamut from amusing to creepy. One, Christina said, would respond to her with "weird zoomed in videos" of her and her cat — that one she enjoyed. Another, however, wrote an entire screenplay based on her tweets that featured people in her life that she'd mentioned online.

"It was terrifying," the lawyer, who tweets under the handle @floozyesq, said.

Marcotte said she too has noticed a particularly weird brand of reply guys in recent months that seem to suggest she is part of a Russian conspiracy.

"I've also been getting reply guys posting conspiracy theories," the journalist said. "I don't know if they're Russian bots or not, but either way, they get blocked."

Female Twitter users of all stripes — leftists and right-wingers, comedians and politicians, academics of every discipline and Instagram celebrities alike — get reply guys. Whether one has 500 followers or 500,000, they manage to populate their mentions with unwarranted and uncalled-for advice, praise or derision. What binds them together, sociologist Tristan Bridges of the University of California, Santa Barbara said, is their "lack of intellectual humility."

"It's not simply intellectual arrogance; it's a kind of unwarranted intellectual arrogance," Bridges, who specializes in the sociology of gender and masculinity, told Raw Story. "Much of this behavior that I witness online is in the form of prominent journalists or scholars who happen to be women being critiqued or challenged online by someone who appears to have no specialty on the topic about which they're starting an argument."

Sociologist Lisa Wade, a specialist in the sociology of sex at Los Angeles' Occidental College, suggested reply guys' attempts at engaging with prominent women who haven't indicated that they wish to speak to them is likely an example of benevolent sexism. This type of sexism, Wade told Raw Story, is best illustrated by the classic cat-calling situation — a man who initially begins by telling a woman on the street that she's pretty or should smile. Benevolent sexism turns hostile, she said, when they are rebuffed, often directing misogynist slurs at the women who have no interest in their advances.

@AngryBlackLady Tbh if anyone could fuck it up, it’s American medicine. But your point is compelling and stands.
— RD Bacon (@RD Bacon) 1532623168.0

Along with the blocking solution Marcotte suggested, Wade said that she's seen a number of screencapped or quoted replies that were particularly egregious — and has employed similar tactics for her own reply guys.

"Sometimes they're so absurd, I can't help myself and mock them," the sociologist said. "And when I do, sometimes they're like 'I just can't follow your logic.' They don't even know, and I have to assume that they give me so little credit that they can't imagine that I have the capacity to both dismiss them as anyone I care to engage with in any way or as an authority and then also be satirical."

The root of the reply guy phenomenon, Marcotte and Wade both said, seems to be a misplaced sense of entitlement to women's time that is far from limited to the internet.

"There's this longstanding — we're talking thousands of years — belief that women are for men, that they are here for men and whatever else they're doing there's this notion that they're doing it for men and particularly for male attention and praise," Wade said. When women, regardless of their expertise, make posts online, reply guy logic follows, it must be done to get a response from them.

"There's this notion, too, that men are doing us a favor when they jump in and pat us on the head and say 'you're doing a good job honey, keep it up,'" the sociologist said.

Christina has another theory about the way reply guys attempt to interact with the women they follow.

"I think the real motivation behind this, and I've talked to several other women about it and they've agreed, is that as a woman with a large following on Twitter, you become sort of like a sitcom character to a lot of people," she said. "Like, my tweets about my day become like episodes in a TV show for them to consume, people in my life become side characters, there are different plots, etc.

"So men especially feel entitled to comment and participate," she continued, "because I'm not a 'real' person anymore, I'm just a character who makes content."

As a problem that only recently earned a name, the jury remains out on what to do with reply guys and whether or not they're harmful. But Marcotte, at least, has a fantasy solution that matches their occasional absurdity. She said she'd like to see reply guys "wake up, Freaky Friday-style, in a woman's body and have to spend a year being talked down to so they know what it's like."