It would be great if sex robots would take misogynists off the dating market, but it will never happen 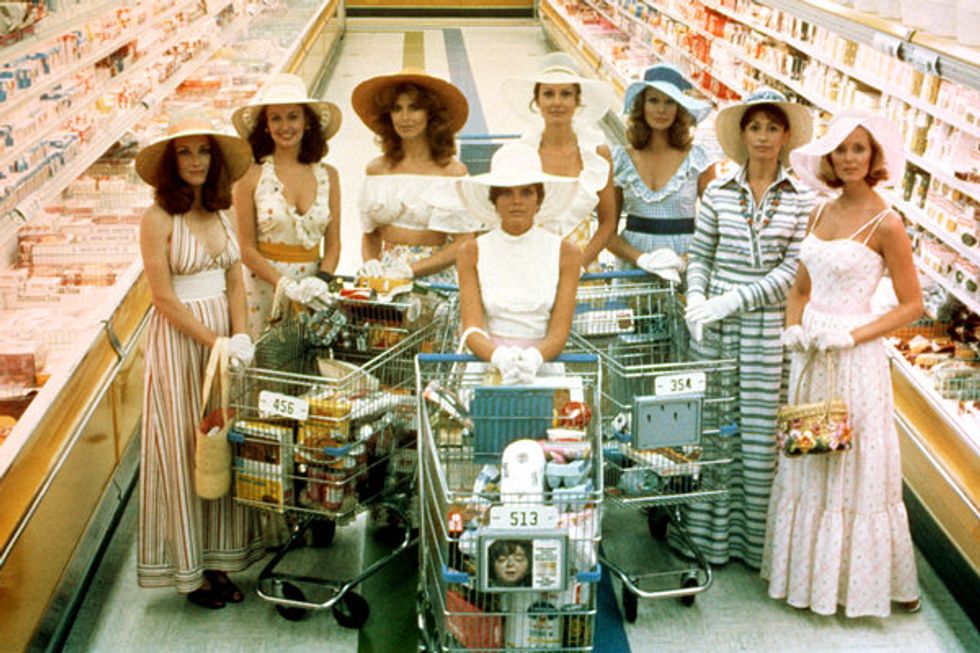 Oh man, the misogynist internet never stops being a fascinating font of wrong-headedness. The latest memorable dive into painful stupidity comes to us from David Futrelle and the folks at the Blue Pill: The incredibly depressing ladies auxiliary of the Red Pill (a subreddit dedicated to spinning out misogynist bullshit under the pretense of "pick-up") has a thread where they talk about how they see The Stepford Wives---both the movie and the book---as a morality play about why women should act like submissive sexbots of the sort the "wives" in the story actually are.

It starts with a woman quoting this passage from the book:

"You must have been very young when you were president of the club," Joanna said. "Which means you're intelligent and have a certain amount of drive. Are you happy now? Tell me the truth. Do you feel you're living a full life?"

Kit looked at her, and nodded. "Yes, I'm happy," she said. "I feel I'm living a very full life. Herb's work is important, and he couldn't do it nearly as well if not for me. We're a unit, and between us we're raising a family, and doing optical research, and running a clean comfortable household, and doing community work."

The woman who quotes this says, "Kit's response to Joanna helps me put words on how I feel about relationship dynamics," without noting that "Kit" is not in a "relationship" because Kit is not a human being. Kit is literally a robot. You don't have a relationship with a robot. A relationship requires the presence of two autonomous people interacting, not a man ordering his preprogrammed housework/sex robot around.  She cannot live a full life, because she is not alive. She cannot feel, as she has no feelings. Jesus.

The whole thread is like that, with women reading the story completely backwards from how it's obviously meant to be read, by supporting the husbands of Stepford and sneering at the wives for making the husbands resort to such drastic measure. "The book has a cringe-worthy passage about Joanna's  refusal to do housework," sneers one.

"The main character was a psycho," writes another. "She not only did not work, but she also didn't really take care of the house or kids, and pitched a fit when her H got angry when she would opt to hang out with her friend and get high."

TL;DR: Sure, the husbands of Stepford literally kill their wives and replace them with robots, but this woman sometimes finds housework boring. That's the real crime here.

But it's hard to be too mad, because of comments like this: "Because obviously, a pretty housewife who never complains and who isn't a feminist is too good to be true, so she must be a robot ! ;)"

I can't feel anything but pity for someone who is so desperate for male approval that she slobbers to a bunch of misogynists about how she's a good girl who will take whatever crap you dish out without ever complaining. Jesus.

These women probably don't know it, but the author of The Stepford Wives, Ira Levin, wrote another classic horror story about a man who believed that his wife was his property to dispose of however he liked: Rosemary's Baby. So I think any strained attempt to suggest that he was somehow trying to satirize feminism is clearly mistaken. Guy in Rosemary's Baby sells his wife to Satan to be raped and forcibly impregnated. Levin clearly takes a dim view of this particular attitude towards women.

But it's worth taking a moment to point out that The Stepford Wives isn't just satirizing men who are so weak-minded and egotistical that they crave perfectly compliant, submissive women. After all, if that's all the men of Stepford wanted, they could just divorce their existing wives and create their robot wives from scratch. They could make their new "wives" even more perfect-looking, instead of modeling them on real women who, however pretty, have idiosyncratic features that would read as "flaws" to someone so conformist-minded.

No, what takes Levin's story to the next level is that he grasped that these misogynists don't just want a generic robot wife. They want to take a woman who exists in the real world, a woman with talents and flaws and a will of her own, and bring that woman to heel. Levin captured the intensely personal nature of misogyny and how sexist men inflict their beliefs with a specificity that is chilling. It's not about "women", generically. It's about claiming a woman as "your" woman and proceeding to dominate her, in this case, entirely.

In other words, it's not just a satire of sexism, but a poignant metaphor of domestic violence. Levin has a lot of flaws as a writer, but I appreciate how he understands the role that gendered violence plays in maintaining the social order. Rape and domestic violence are portrayed fantastically, because it's horror fiction, but the motivations and implications of these acts are rooted firmly in how they work in the real world.

That point is critical to keep in mind when considering the recent temper tantrum by online misogynists over this stupid "sexbot" non-controversy. Two random professors from Europe have decided to form a group, whose actual size and importance is questionable to say the least, to fight against sex robots. "We propose that the development of sex robots will further reduce human empathy that can only be developed by an experience of mutual relationship," they argue.

I'm skeptical. Their argument sounds like a variation of the widespread but poorly evidenced conservative belief  that heterosexual men, if left to their own devices, naturally abhor women and therefore have to be coerced, often through sexual blackmail, into relationships. They mention prostitution a lot on the site, but I would point out that the existence of prostitution undermines this concern. Men can already purchase sexual gratification without the supposed troubles of a relationship. And yet, at the end of the day, most of them want a relationship anyway. Even the misogynists do, which I'll return to.

The existence of this website---which I'm not entirely convinced is not a Poe---has all the MRA sorts in a tizzy, because they really want to believe, sans evidence, that feminists are craving their cock and therefore are trying to kill off any robotic competition for it. No, I'm not kidding. Milo Yiannopoulous trots out a half-witted, possibly drunkenly written explanation for this at Breitbart, titled "Sexbots: Why Women Should Panic". Because we are supposedly going to be deprived MRAs offering their penis to you. Which actually induces a sense of relief, if there was any chance of it actually happening.

"When you introduce a low-cost alternative to women that comes without all the nagging, insecurity and expense, frankly men are going to leap in headfirst," he argues. It's the standard package misogynist argument.

It simply isn't true that the only use men have for women is sexual release and some housekeeping, and that they loathe us otherwise. For one thing, healthy, non-misogynist men really, truly do want actual relationships with actual human beings. Yes, that can be hard sometimes and people fight and aren't always on the same page, but at the end of the day, most of us crave that kind of intimacy that you simply cannot simulate.

But, as Ira Levin realized in the 70s, even misogynist men---men who do want women to be compliant and submissive---still aren't satisfied with the idea of having a woman, any woman, just show up in their house to serve them quietly. No, to the detriment of us all, they, like their non-misogynist counterparts, tend to get attached to specific women. After all, they are human beings. So, like normal human beings, they are attracted to specific people whose looks and personality just does it for them. They feel affection, even love. But what happens is that gets distorted through their misogynist lens. Instead of being happy to just be with the woman they love, they instead develop an obsession to own, control and possibly consume (not literally, to be clear) her. That's why domestic violence happens in the first place. The abuser falls for a very specific woman, but as soon as he gets her, he starts trying to contain and control and eventually squash her so that can possess her more thoroughly. That's why, when a woman leaves her abuser, he doesn't just shrug and move on. He wants this specific woman. She is "his" woman. He will often stalk her and try to repossess her.

Honestly, I wish misogynist men would just simply hold generic hate for women and that they could be taken off the dating market completely with sex robots. But that's not how this works. Misogynists are always going to end up fixating on specific women. Their ability to love has been perverted by their ideology, but the instinct to gravitate towards specific individuals still lingers within them.

That was made evident by this MRA, found by Futrelle of course, who fantasized about modeling the sexbots they long for after ex-girlfriends. But his reasoning was particularly interesting: 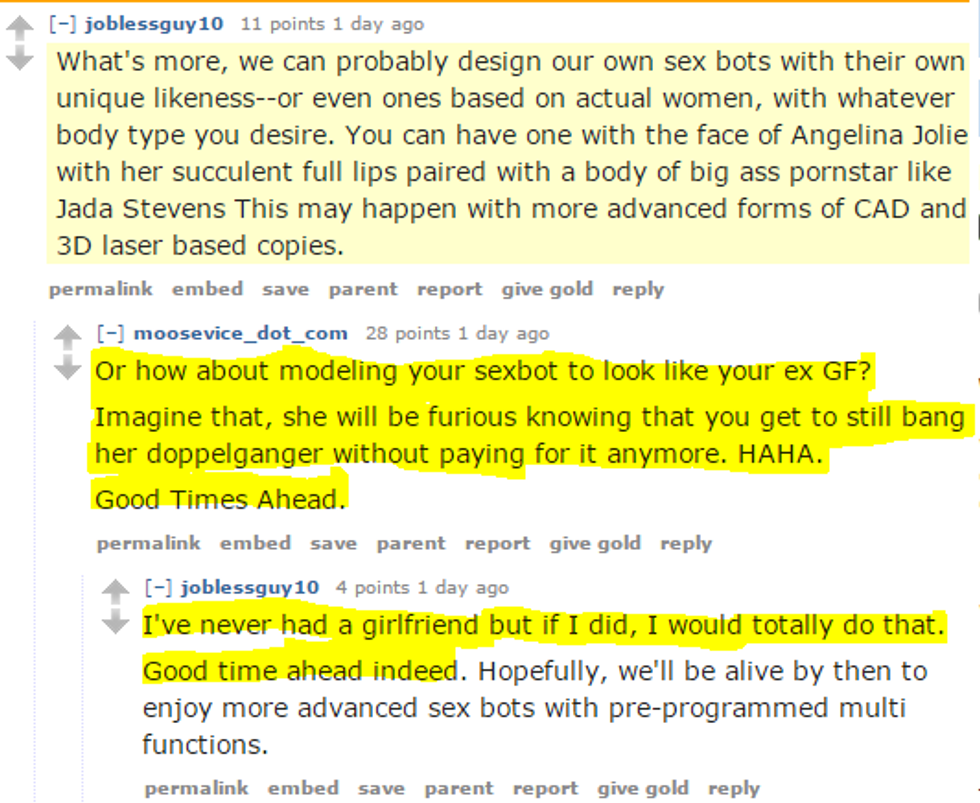 It's not because you just like how your ex looks, which again, doesn't make much sense anyway as you can almost always design an idealized sexbot that doesn't have the idiosyncratic physical flaws actual people have. It's not even about sex at all but knowing "she will be furious". This is not the reasoning of a man who indifferently views women as sex dispensers that would work a lot better if they didn't talk so much. That's the thinking of a man who is hung up on a specific woman and is casting around desperately for ways to make her think about him as much as he thinks about her. And that's why, sadly, I don't think that even if they could make good sexbots, that those sexbots will be taking many men off the dating market. Even men who really shouldn't be there in the first place.