MSNBC's Hallie Jackson hammers Sarah Sanders over Trump's Helsinki walkback: 'Why should this president have any credibility?' 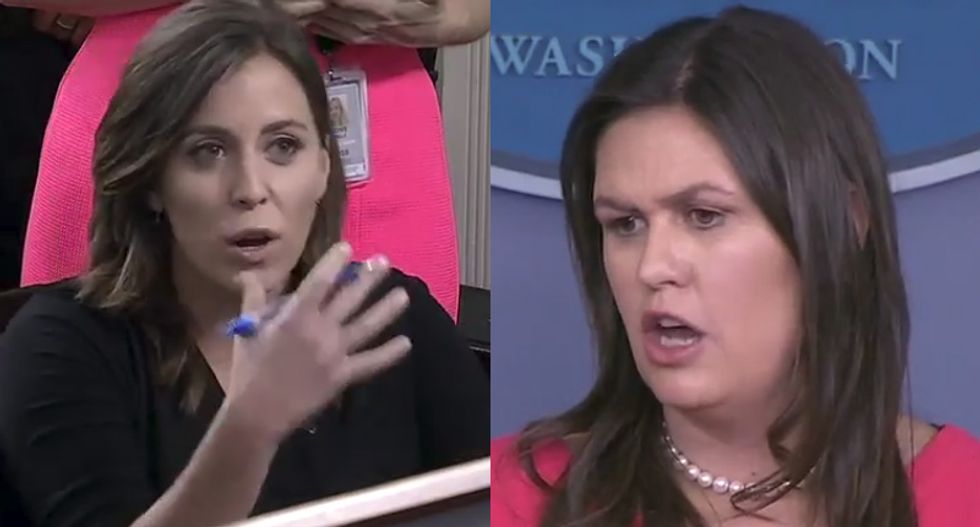 During a joint press conference with Putin on Monday, Trump suggested he didn't believe intelligence agencies' assessment that Russia meddled in the 2016 election.

"My people came to me, Dan Coates, came to me and some others they said they think it's Russia. I have President Putin. He just said it's not Russia. I will say this: I don't see any reason why it would be," he said.

On Tuesday, Trump walked back his comment -- claiming that he meant to say "I don't see any reason why it wouldn't be."

Sanders, however, said Trump was saying "no" to answering questions, not "no" to the question itself.

"He does believe that they would target U.S. elections again," she said.

Later in the press briefing, reporter Hallie Jackson questioned Sanders' explanation. Jackson said multiple people in the room believed that Trump was responding to the question.

But Sanders insisted Trump wasn't responding to the question.

Jackson then said it was the "second time in three days that the president or the White House has come out and reversed what the has said... why should this president have any credibility?"

"Actually, I'm interpreting what the president was saying. I'm not reversing it," Sanders said.