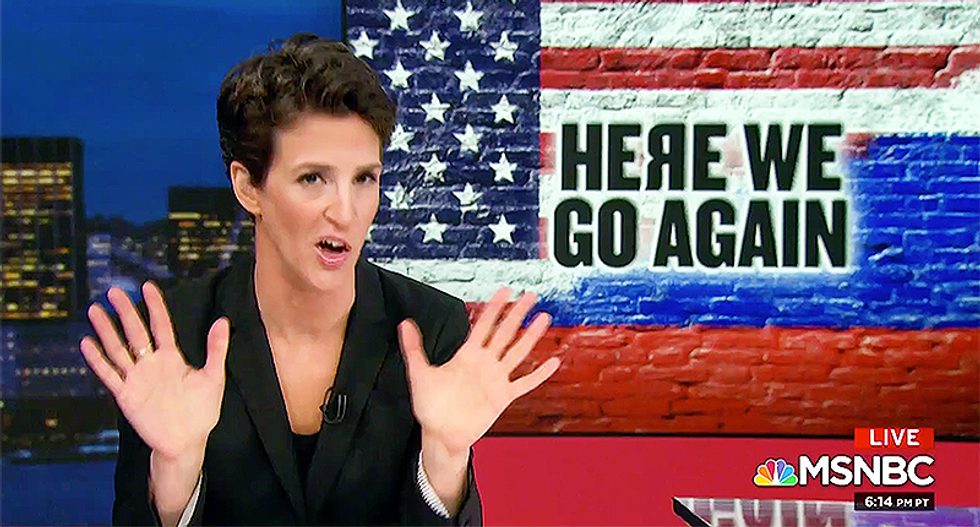 During Tuesday's Rachel Maddow show, the MSNBC host uncovered a new federal indictment that goes straight to a Russian conspiracy in the Maria Butina case.

According to Maddow, the information comes as part of the judge's footnote that names Republican Paul Ericson as Butina's fake boyfriend. While Ericson hasn't been charged or indicted, he's described as "U.S. Person" and a "co-conspirator" in the court documents.

"And according to what has happened in court in the Butina case thus far, his purported girlfriend apparently offered to help investigators in their investigation of the guy who was supposedly her boyfriend," Maddow explained. "Even though prosecutors say he really wasn't."

She then cited a Daily Beast story revealing that the Wikipedia pages for both Butina and Ericson have been scrubbed from any mention of ties to the Russian government, broker meetings during the campaign, any criminal history, business or money being funneled from Russia to the NRA.

"When somebody mounts an effort to make real information go away, other people are likely to reinstate that real information," Maddow commented. "But there has been a diligent effort online to submarine all of that information about this accused Russian agent, who, tonight, sits in jail, as well as the American who helped her."

The Beast reported that the edits made to the Wikipedia pages were done so from the Russian version of Wikipedia. It all made Maddow see part of a theme. At the same time that this is happening, both the White House and the Kremlin scrubbed any indication that a reporter asked Russian President Vladimir Putin a question about wanting Trump to win in 2016.

In another strange turn, Maddow described a video that President Donald Trump tweeted out that featured a "deceptively edited old clip of Hillary Clinton." The video, it turns out, was taken from Russian state TV while she was Secretary of State.

"I wonder who dug that Hillary Clinton interview out of the archives of Russian state television?" Maddow asked. "I wonder who gave it to the president to send out on his Twitter feed a few days ago. Once he did send it out, a pro-Trump conservative media outlet and Sputnik news from the Kremlin, they both gleefully amplified it on Twitter with this second clip. They both had it word for word to further spread what the president had done."

She went on to call this outright "garbage time" and "deliberate nonsense."

"But here's an indication that this isn't just small stuff and transparent propaganda," Maddow continued. "And disappearing facts we know are true. It is also the most serious stuff in the world, too. Go back to that Putin-Trump summit last week."

Maddow also noted that the interesting development since the meeting with Putin has been that Trump has been pitted against his own military advisors on Syria.

Indeed, Trump's military doesn't seem to know it either.