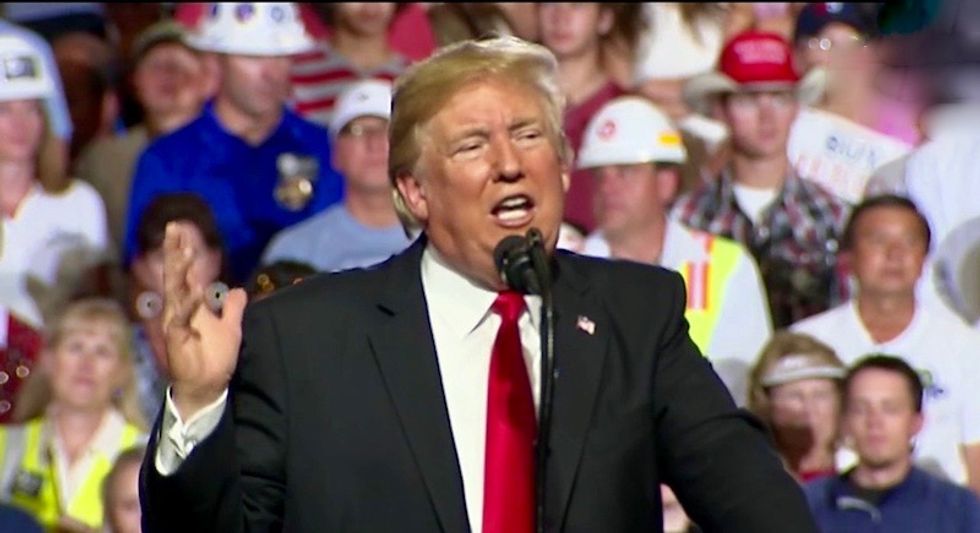 Appearing on an all-female panel on CNN on Friday afternoon, a major Republican strategist said she was appalled at President Donald Trump mocking the anti-sexual assault #MeToo movement in a speech to supporters in Montana on Thursday night.

Speaking with host Brooke Baldwin, Alice Stewart -- who served as spokesperson for the 2016 presidential campaign of Sen.  Ted Cruz (R-TX) -- said that Trump's comments maligning Sen. Elizabeth Warren (D-MA) before taking a shot at #MeToo, was the president going off script as he is known to do at his rallies to the delight of his supporters.

"Alice, you know, you're a Republican," Baldwin began. "When you hear the president deliver that line, you know, when you talk to Trump supporters or people at rallies like this, why laugh? What do you think this is doing to our country?"

"It is diminishing, in my view, a lot of morals that a lot of people have had for many years," she began. "It makes me cringe when I hear him talk like that and, as you say, Brooke, for people to laugh and to encourage him.  And the problem when this president is out at an event and he goes off teleprompter -- I pray this was not on the teleprompter -- when he goes off prompter, he becomes out of touch."

"He becomes out of touch with the seriousness, as you said, of the me too movement, which is critical for so many reasons in empowering victims of many different types of abuse," she continued. "But if he doesn't share the momentum and the feeling and the message behind that, then he should just keep his mouth shut, and the last thing he should be doing is mocking it and making jokes about it."

"I just certainly don't understand this and for him to do this, even in private, is unacceptable, but certainly not at an event," the exasperated Stewart said. "This, yet again in my view, goes to the civility that has really gone down in the last several months."

"Look, I campaigned hard against Donald Trump in the primary, and I campaigned for people that were men of civility and honor and dignity. I ultimately voted for him for his policies but at the end of the day it's a really important thing for us to stick to morals and principles and standing up for issues that are so important to this country and me too is one of those issues."

You can watch the video below via CNN;