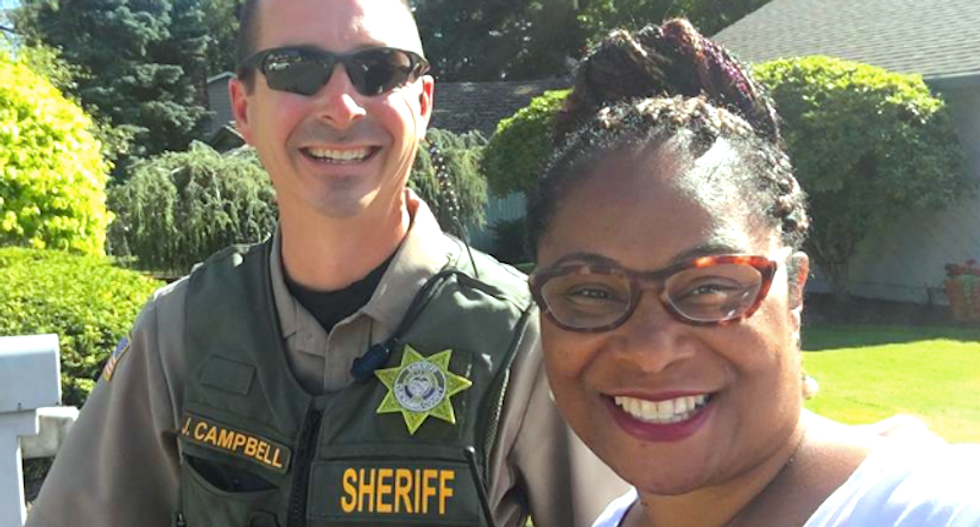 A black Oregon lawmaker was knocking on doors in the neighborhood she represents when a frightened constituent called police to question her.

State Rep. Janelle Bynum, a Clackamas Democrat, was canvassing alone Tuesday when a sheriff's deputy pulled up to her and asked whether she was selling something, reported The Oregonian.

"I don't believe this," thought Bynum, who was tapping notes on her cell phone after speaking to a constituent.

The 43-year-old Bynum introduced herself to the deputy as a state legislator, and she guessed that a neighbor called him to investigate.

The deputy said someone had called to report her behavior -- spending several minutes at each house and typing on her cell phone -- appeared as if she was casing houses to burglarize.

"It was just bizarre," Bynum told the newspaper. "It boils down to people not knowing their neighbors and people having a sense of fear in their neighborhoods, which is kind of my job to help eradicate. But at the end of the day, it's important for people to feel like they can talk to each other to help minimize misunderstandings."

Bynum said she's probably knocked on more than 70,000 doors while campaigning for office, and she often takes notes about her conversations with the people she represents.

The lawmaker, who was elected to represent House District 51, got the deputy to call the woman who reported her as suspicious, and Bynum said she was apologetic and said she called 911 because she was worried about public safety.

"When people do things like this, it can be dangerous for people like me," Bynum told the deputy, who asked the lawmaker whether he'd made her feel uncomfortable.

Bynum said the deputy was courteous and professional, and he agreed to take a selfie with her -- which the legislator posted on her Facebook page, along with a post explaining what had happened.

"We all know that we're not in a society that is perfect, and we have wounds that still need to heal, but at the end of the day, I want to know my kids can walk down the street without fear," Bynum said.

Bynum said she understood the woman's concerns, but she wished she would have tried talking to her first or asking a neighbor to speak with her before calling police -- which she said had wasted the deputy's time.

The legislator said she hoped one day to meet the 911 caller -- who refused to identify herself or share her address -- and she asked her constituents to expect her to visit as she campaigns for re-election.

"I hope everyone gets a good look at my face," Bynum said, "because I'm coming to your door."