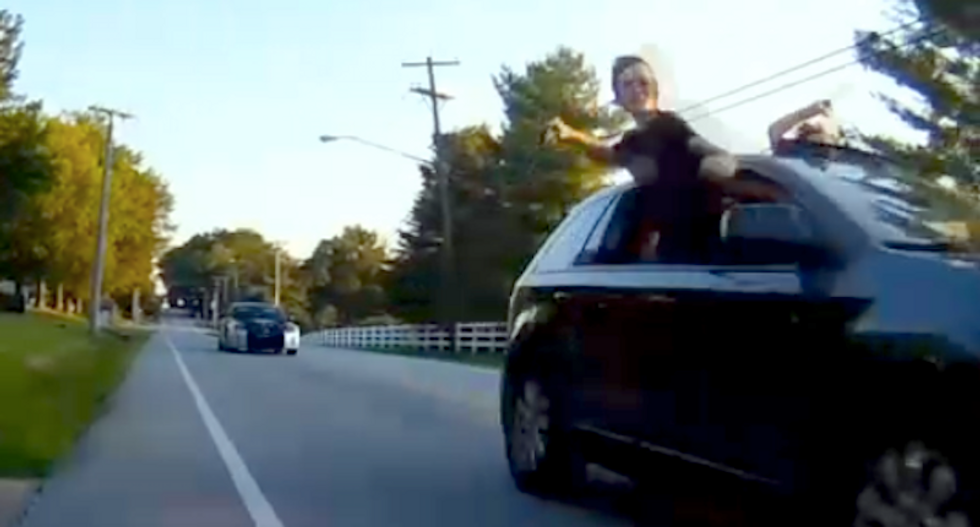 Racists threw a bottle at a black bicyclist in Tennessee and yelled slurs as they drove past -- but he caught a clear shot of the attack on camera.

Charles Peacock was riding his bicycle July 9 in Chattanooga when a Ford Edge SUV drove up from behind, reported WRCB-TV.

Video recorded by three cameras Peacock mounted on his helmet and bicycle shows two white men or teenagers hanging out of the SUV's passenger-side window and sunroof, just before one of them threw a bottle at the black man.

“He was about 20 to 25 yards behind me. He was already out of the window from his waist, drawn back with the object in his hand, getting ready to throw it,” Peacock said. “It was just uncalled for."

Peacock was struck by what he believes was an empty bottle, and his arm remains bandaged a week later.

“After they threw it, they said I got that f*cking N-word,” Peacock said.

Peacock was unable to get a clear look at the assailants, but he recorded them on video and caught their license plate number -- Tennessee R17 84N.

“That's not the first time I had a racial slur said to me while riding a bike, but as far as someone to actually throw something at me like that, I feel like that's going too far,” says Peacock. “They're not going to run me away -- I'm going to keep riding."