Statue of Liberty climber to be arraigned in federal court: paper 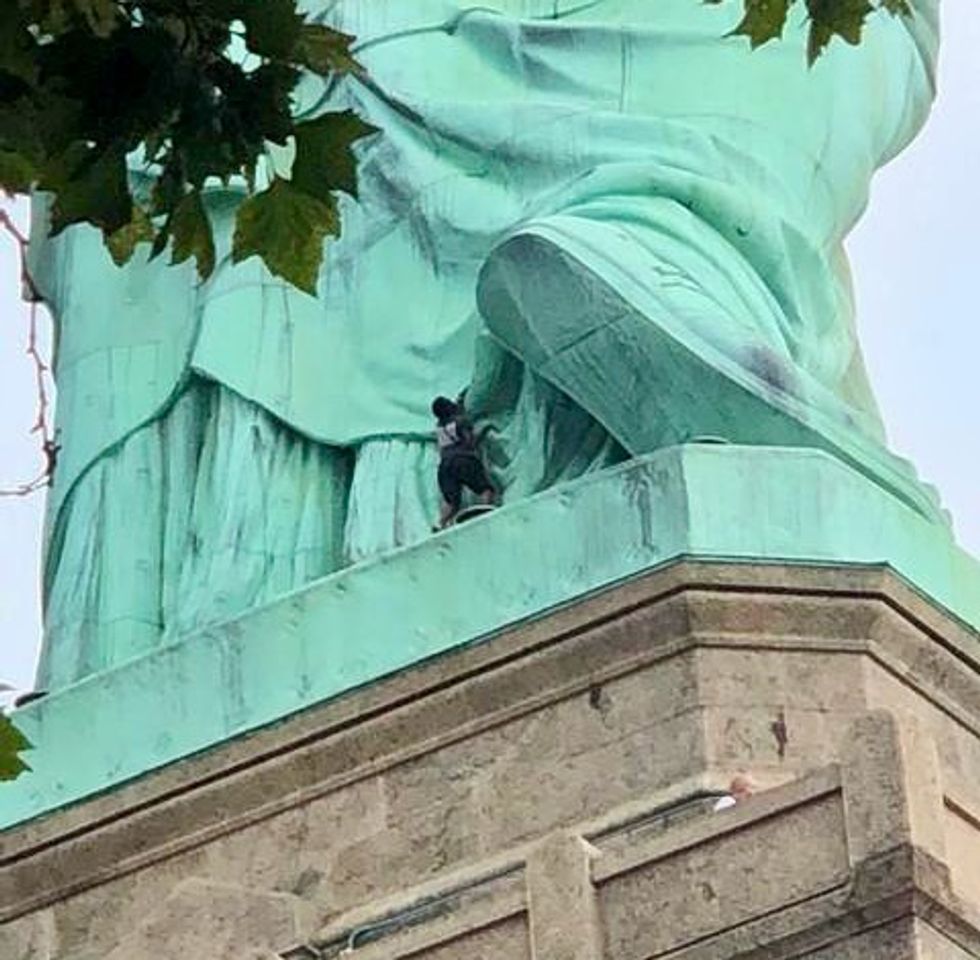 A protester is seen on the Statue of Liberty in New York, New York, U.S., July 4, 2018 in this picture obtained from social media. Danny Owens/via REUTERS

A New York woman was expected to be arraigned in federal court on Thursday, a day after authorities say she scaled the stone pedestal of the Statue of Liberty to protest U.S. immigration policy, media reported.

Therese Patricia Okoumou, 45, of Staten Island, was charged with trespassing, disorderly conduct and interference with governmental administration and was being held by the Federal Bureau of Prisons, the Wall Street Journal reported.

Okoumou was scheduled to be appear before a federal magistrate for an arraignment hearing, the newspaper reported.

On Wednesday, Okoumou climbed the stone pedestal of the Statue of Liberty and began a three-hour standoff that led to the evacuation of the landmark on America’s Independence Day.

A group called Rise and Resist said on Facebook that Okoumou was part of its Fourth of July protest at the base of the statue against immigration policy. The protesters unfurled a banner that read “Abolish ICE.” The group said it was working to get legal representation for Okoumou.

ICE refers to the Immigration and Customs Enforcement agency, whose recent treatment of families that crossed illegally into the United States has become a source of discord.

ICE is at the center of the Trump administration’s shelved policy of separating some children from their parents when they cross illegally into the United States from Mexico, leading to calls to disband the agency.

Television footage on Wednesday showed two officers, outfitted in harnesses and ropes, slowly approaching a woman and grabbing her as she clung to the sloping side of the more-than-300-foot-high (91 meters) statue, moments after she tried unsuccessfully to scale Lady Liberty’s robes.

The incident forced the Park Service to evacuate Liberty Island on a sweltering holiday afternoon when thousands usually visit the historic statue, a symbol of American freedom that has stood in the New York Harbor since 1886.

The Statue of Liberty, a gift from the people of France to the people of the United States, has become a worldwide symbol of American values. Inscribed on its base is a sonnet by Emma Lazarus, which includes the famous lines “Give me your tired, your poor, Your huddled masses yearning to breathe free”.

Video of Climber Below