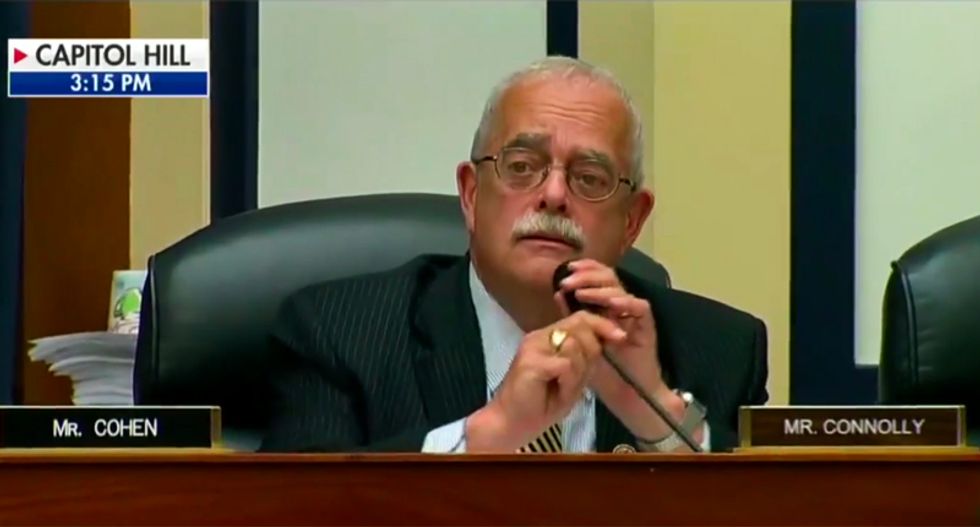 Rep. Gerry Connolly (D-VA) made a mockery of the House hearing on the disparaging comments FBI agent Peter Strzok made about now-President Donald Trump before the election by reading into the record statements made by members of Congress who expressed similar worries about Trump as a candidate.

Following an interrogation by House Rep. Darrell Issa (CA) who asked Strzok to read some of the comments he made about Trump -- including calling the president a "douche" --  Connolly compared the hearing to a "Russian political assault trial."

"It's got all the trappings," Connolly continued. "Character assassination, demagoguery, connecting dots, generalizing from an isolated incident, cherry-picking facts, sometimes fabricating facts. It's astounding and a new low in the United States Congress."

Noting that Strzok is under attack specifically for the comments, Connolly read off a series of quotes, after which he asked the FBI agent if they were his words. In every case they were the words of a Republican.

"'My wife Julia and I, we have a 15-year-old daughter. Do you think I can look her in the eye and tell her I endorsed Donald Trump when he acts like this and his apology? That was no apology. That was an apology for getting caught. I can't tell the good people in my state that I endorse add person that acts like this,'" read Connolly. "Was that you, Mr. Strzok?"

"No it was not,"the FBI man replied.

"It was Republican, [retired Congressman] Jason Chaffetz," Connolly shot back.

"Did you write the following. 'For the good of the country and to give the Republicans a chance after defeating Hillary Clinton, Mr. Trump should step aside. His defeat seems almost certain. Four years of Hillary Clinton is not what is best for this country.' That's you, right?" he was asked.

"No it was the congressman from Colorado [Rep. Mike Coffman (R)]," Connolly explained.

And it went on like that for the rest of his question period.