Strzok hearing finally spirals into 'You're out of order' -- 'No, you're out order!' chaos after chairman cuts off agent's answer 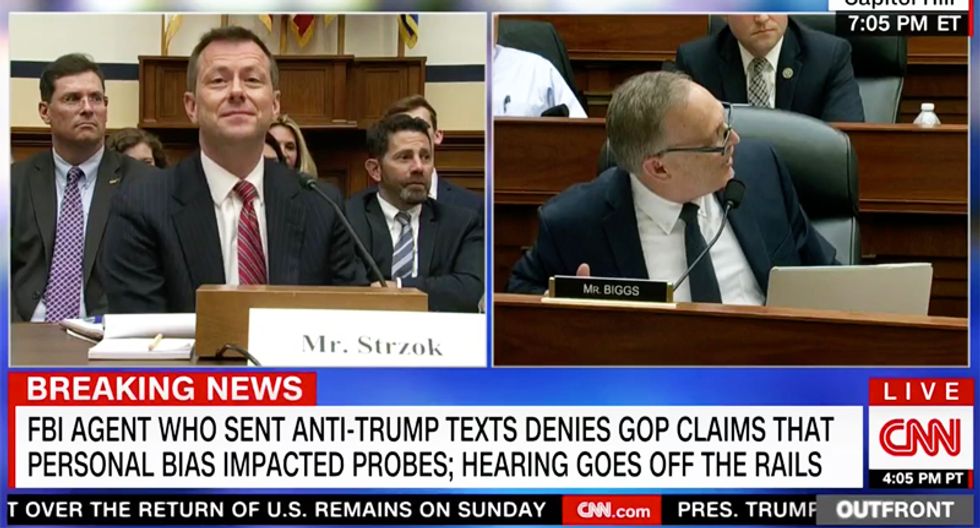 The day-long grilling of FBI agent Peter Strzok finally exploded into recriminations towards the conclusion, after hearing Chairman Rep. Bob Goodlatte (R-VA) continued to let Republicans couch their questions as statements attacking the FBI man so that he wasn't allowed to respond.

Throughout the day, Strzok was told he could respond to accusations made by Republicans only if they posed their words in the form of a question. From that point forward, his interrogators would launch vicious attacks on him, including overtly lying, but without asking him to respond.

Late in the day, Rep. Andy Biggs (R-AZ) made demonstrably false statements from the Inspector General's report on Strzok all the way up to the end of his time, before yielding back to the chair.

When Strzok attempted to respond, Goodlatte shot him down leading to an off-camera shouting match between a Democratic congresswoman and the hearing head, with shouts of "You're out of order!" to which she responded, "Mr. Chairman, you have said throughout this hearing that at the conclusion of the questioning, the witness would be permitted to respond."

The shouting continued for a period of time, before Goodlatte gavelled everyone into silence.