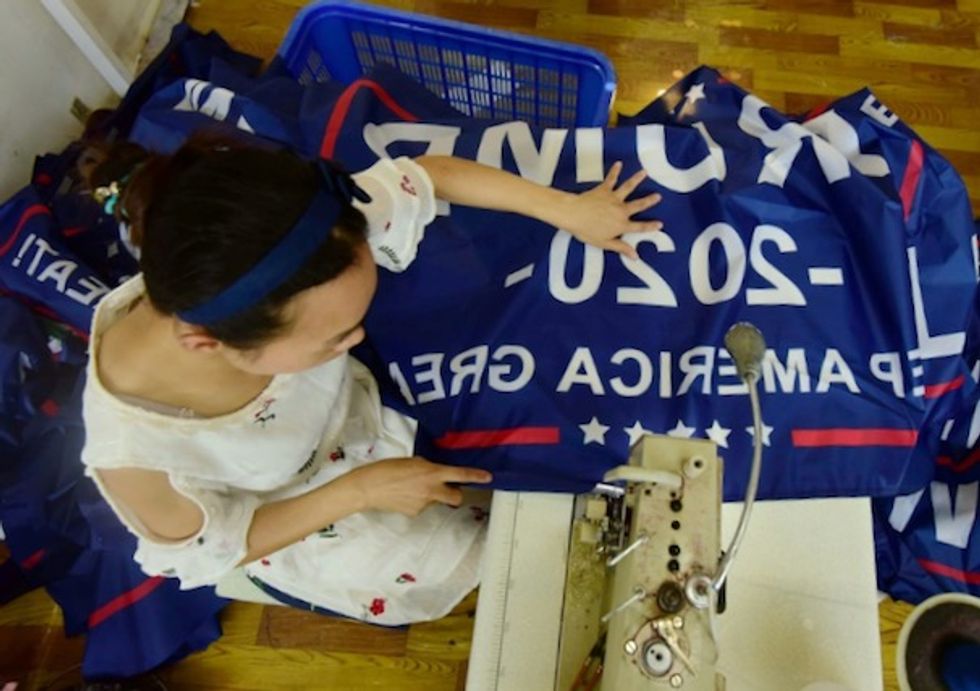 A current hot-seller is a blue and white banner that reads "Trump 2020: Keep America Great" AFP

As the China-US trade war rages, a factory set amid corn and mulberry fields in central China stitches together US and "Trump 2020" flags -- and business is good.

The US and China have slapped tariffs on billions of dollars worth of each other's goods, but there is little evidence of the dispute at the Jiahao Flag Company in Anhui province.

Instead, as a dozen sample flags flutter outside the factory building, workers bustle and sewing machines buzz inside amid a profusion of colour from the factory's wares.

Trump has long railed against Chinese imports, pushed a "buy American" ethos, and launched the trade confrontation this year to punish China for what he considers predatory trade policies.

But the anger does not appear to extend to flags.

"We can easily sell more than 10,000 Trump 2020 campaign flags each month," said Yao Dan, who founded the family business in 2014, though the company does not track who the ultimate buyers are.

The company makes thousands of flags daily for "just about every country, mainly for export" including to the US, said his older sister Yao Yuanyuan, 33, who manages the factory.

In the lead-up to the 2016 US election that brought Trump to power, she said, the factory focused for three months solely on making Trump campaign flags to satisfy demand.

The current trade conflict has had no discernible impact, she adds. American-themed flags remain among their top-sellers, with many sold via Chinese e-commerce giant Alibaba, and sales volumes are expanding.

"The demand has been growing," Yao Yuanyuan said.

"This market is not yet saturated. We are hoping to increase production and expand the factory's size, at least to double it within the next three years."

Trump is widely accused of taking a simplistic view of the complex US-China trade and economic relationship as well as the fact that Trump family businesses continue to have products manufactured in China.

The flag company's success has been a boon for local workers, mostly former stay-at-home moms or women who might otherwise have had to seek work in other provinces, who now work flexible hours to earn about 3,000 yuan ($450) a month.

"It's closer to home and they pay me pretty well," Qi Chunyan, 40, said while sewing a white stripe onto an American flag.

"It's convenient for me to take care of the kids and the elderly in the family."

Some bring their children during the summer when school is out.

"If no one is at home to take care of my daughter, I bring her here to play and see whether adult work is hard," said Wang Bingqin, 45, as her 10-year-old daughter helped trim the flags that her mother had sewed.

"It will be helpful for her when she grows up."