Trey Gowdy explains why he got owned by FBI agent Peter Strzok: ‘Public hearings are a circus’ and a ‘freak show’ 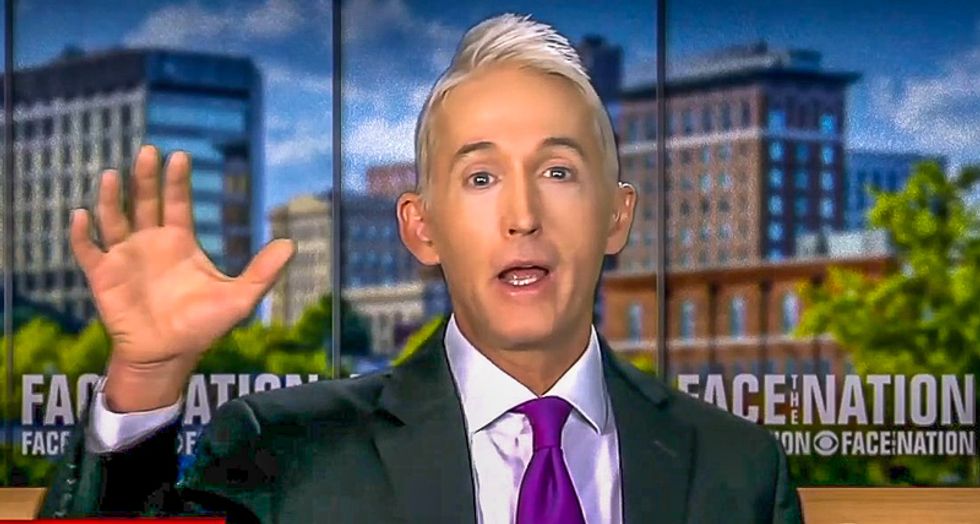 During an interview on CBS, Face the Nation host Margaret Brennan referred to a recent hearing where Republicans attacked FBI agent Peter Strzok, who was accused of being biased against President Donald Trump. The hearing, however, backfired on Republicans when Strzok lectured Gowdy about not using the proceeding as a ruse to cover up the president's "disgusting" attacks on the FBI.

Brennan noted that Trump, himself, had used that hearing to smear the entire FBI.

"A point here that seems to be getting lost or at least when the president is speaking, he's conflating these specific individuals... with the entire intelligence organization that is the FBI, and there is some concern that that is corrosive to our democracy," Brennan said. "Do you fear that your hearing is being used in that way?"

"But I would also say this," he added. "Put yourself in President Trump's shoes for just a second. Jim Comey thought that impeachment was too good for you. John Brennan says you should be in the dustbin of history. Those are not insignificant people. One headed the FBI. The other headed the CIA when you were under investigation."

"Margaret, if you were being investigated by people with that level of bias and animus against you, I think you would be concerned, as well," Gowdy said. "What I would tell the president is no American has been indicted for conspiring to hack the DNC. But Russia did attack us, so focus on the first prong of that Mueller jurisdiction. Let the second prong play out, but so far the with whom if anyone did they do it, we've got a big zero with respect to Americans."