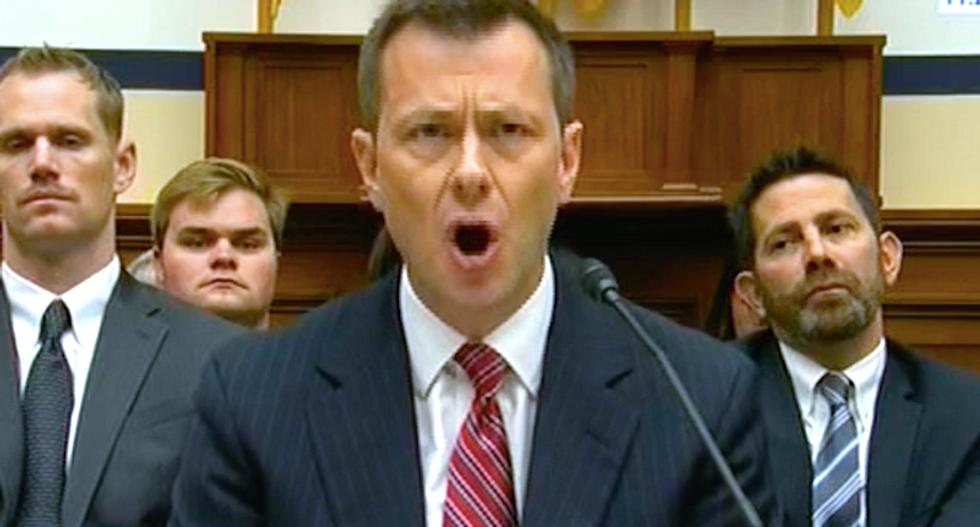 Strzok erupted after more than 10 minutes of badgering by Rep. Trey Gowdy (R-SC) about his political biases against Trump -- who the FBI agent ripped as an objectively unsuitable choice to lead the United States.

"I think it's important when you look at those texts that you understand the context in which they were made and the things that were going on across America," Strzok testified.

"In terms of the texts that we will stop it," he continued, "you need to understand that that was written late at night, off the cuff, and it was in response to a series of events that included then-candidate Trump insulting the immigrant family of a fallen war hero and my presumption, based on that horrible, disgusting behavior, that the American population would not elect someone demonstrating that behavior to be president of the United States."

"It was in no way unequivocally any suggestion that me, the FBI, would take any action whatsoever to improperly impact the electoral process for any candidate," Strzok added. "So I take great offense and I take great disagreement to your assertion of what that was or wasn't."

He recognized that some Americans would vote for Trump despite what he believed was unquestionably inappropriate behavior, and he insisted that he took no action to taint the election against the Republican candidate.

"I acknowledge that is absolutely their right, that is what makes our democracy such a vibrant process that it is," Strzok said. "But to suggest somehow we can parse down the words of shorthand, text actual conversations like they're some contract for a car is simply not consistent with my or most people's use of text messaging."

"I can assure you, Mr. Chairman, at no time in any of these texts did those personal beliefs ever enter into the realm of any action I took," he added.

Strzok told lawmakers that he was overseen by bureaucratic layers of oversight that would have stopped him from meddling in the election, even if he had wanted to do so.

"At every step, at every investigative decision, there are multiple layers of people above me, the assistant director, executive assistant director, deputy director and director of the FBI, multiple layers of people below me, section chief, supervisors, unit chiefs, case agents and analysts, all of whom were involved in all of these decisions," he said.

"They would not tolerate any improper behavior in me any more than I would tolerate it in them," Strzrok continued. "That's who we are as the FBI. The suggestion that I and some dark chamber in the FBI would somehow cast aside all of these procedures, all of these safety safeguards and somehow be able to do this is astounding to me. It couldn't happen. The proposition that is going on, it might occur anywhere in the FBI, deeply corrodes what the FBI is in American society, the effectiveness of their mission and it is deeply destructive."