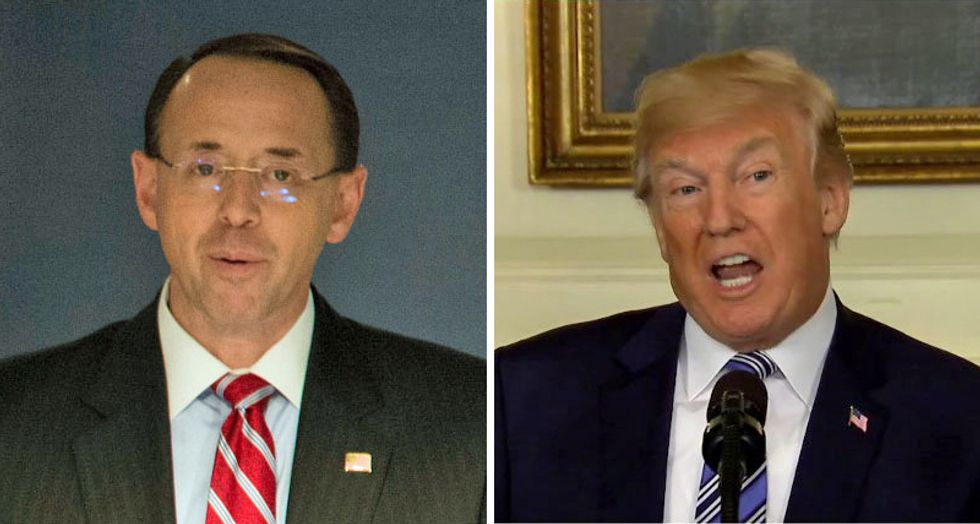 Leading with the headline, "The Russia Indictments: Why Now?," Mukasey wrote "the plain effect of the announcement was to raise further doubts about the wisdom of the meeting—and perhaps to shape its agenda."

He said that it's not the business of the special counsel or the Justice Department and the latter should follow longstanding policies "that candidates should not be charged close to an election, absent urgent need, lest the charges themselves affect the outcome." He said the same principle would apply in this case. "Prosecutors are supposed to consider the impact of their actions on significant events outside the criminal-justice system, and to act with due diffidence.

Today, however, it was announced that the president himself approved the roll-out of the 12 indictments prior to leaving for the NATO meeting and Russia summit, Bloomberg news reported.

Trump reportedly made the move "in the hopes it would strengthen his hand in the talks, according to accounts from people familiar with the decision."

Rosenstein gave Trump the option of before the summit or after. Trump chose the former.

The British Museum and the Greek prime minister are in the "advanced stage" of "secret talks" over the "possible return" of the Parthenon Marbles, local media reported on Saturday.

The ancient sculptures, also known as the Elgin Marbles, were taken from the Parthenon temple in Athens in the early 19th century by British diplomat Lord Elgin and have been held by the British Museum ever since. Greece wants them returned.

Suspect charged with murder in shooting of rapper Takeoff

Houston police said Friday they arrested and charged with murder a man suspected in the killing of rapper Takeoff, a member of the influential hip hop group Migos, who was fatally shot last month.

Speaking at a press conference, Houston Police Chief Troy Finner said Patrick Xavier Clark, 33, was arrested on Thursday evening in connection with the death of Takeoff, who was one of three people shot November 1 at a bowling alley in Houston.

Prince William awards Earthshot prizes as US visit wraps up

Prince William honored climate change innovators during a star-studded ceremony in Boston Friday at the culmination of a US trip overshadowed by a race row and estranged brother Harry's Netflix series.

Britain's heir to the throne rewarded five entrepreneurs with £1 million each ($1.2 million) as part of his Earthshot Prize initiative to support efforts to save the planet from warming temperatures.