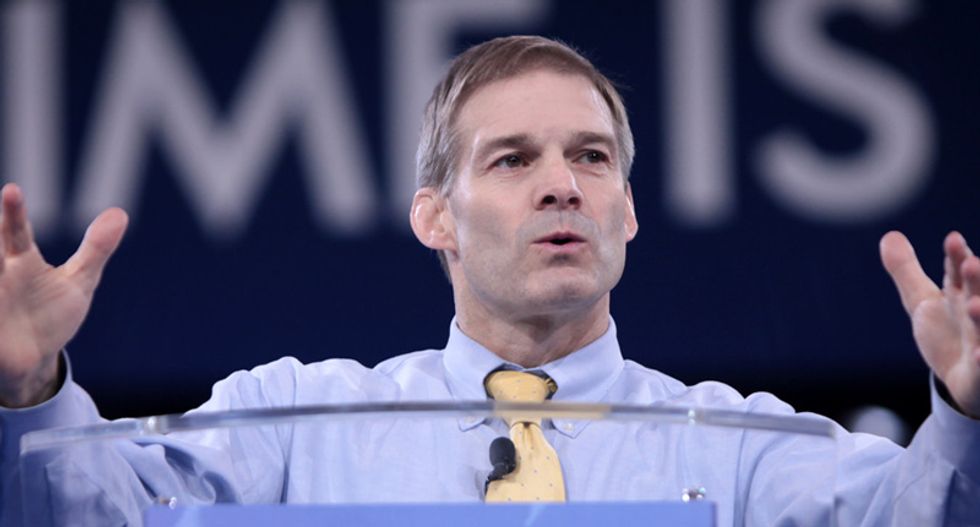 U.S. Rep. Jim Jordan (R-OH) is now claiming that the wrestlers he once coached at Ohio State are now accusing him of knowing about extremely widespread sexual abuse – because he supports President Trump.

In an interview with Fox News late Thursday morning the Ohio Congressman called the men he formerly mentored – many of whom say they consider him a friend and even say they voted for him – liars.

"The head coach Jordan worked for, Russ Hellickson, admits he knew Dr. Strauss was acting inappropriately with wrestlers on his team and confronted him about it," Talking Points Memo reported last week. Dr. Richard Strauss, who died by suicide in 2005, is believed to have sexually assaulted or raped possibly thousands of students at Ohio State.

Jordan went even further, though, repeatedly labeling as liars the former wrestlers – reports say up to 11 at recent count, many of whom acknowledged having been personally sexually assaulted – who say he had to have known.

"If in fact there was someone who faced any type of harm or any abuse, we want them to get their justice," Jordan says.

The sexual assault has never been in question. The only question – which doesn't even seem like a question any more – is whether or not Jordan knew but did nothing. Now he's claiming that maybe it didn't even happen.

Fox News' Bill Hemmer told viewers he takes Jordan at his word, and asked why the allegations are coming out now.

(Note: the allegations are not coming out now. They came out in April, but Jordan ignored the wrestlers asking for his support.)

"Well, I mean, jeepers," Jordan responded. "I mean the way it seemed to me it was sequenced and choreographed and the left and everything they've done, I guess you'll have to look at all that, I find all of that suspect," Jordan said, again suggesting the 11 or so former wrestlers are lying, or activists on the left.

Hemmer then suggested that Jordan's planned run for Speaker is "incentive" to come forward for "people that don't like" him.

"I think so," Jordan replied, claiming, "the reason you see the left coming after me and lies being told is we're being effective in doing what we told the American people we're doing. I also think it has something to do with the fact that I think President Trump is doing a great job, and we're trying to support him in making America great again," Jordan insisted, despite all evidence to the contrary.