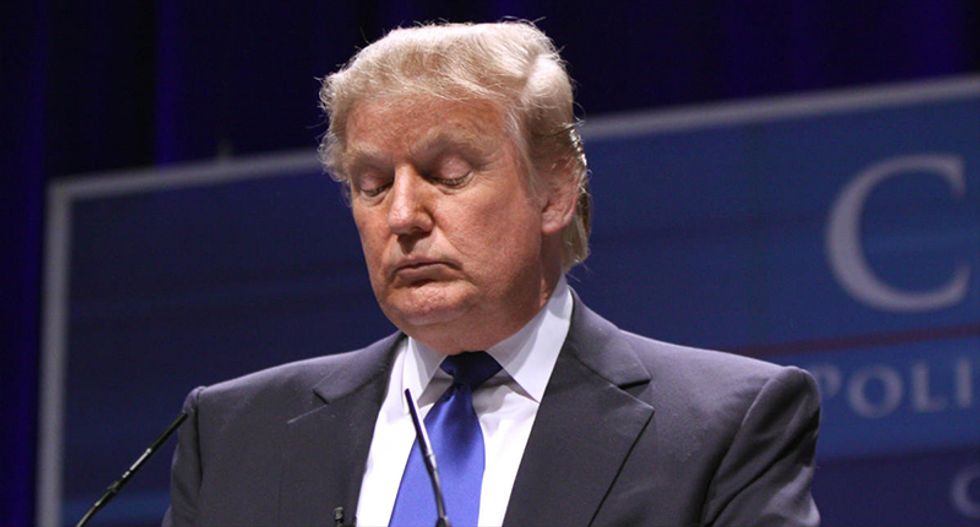 In June, President Trump said that the DOJ "must not" let former congressional technology staffer Imran Awan "off the hook" in what has become a cause célèbre among the far right.

"Our Justice Department must not let Awan & Debbie Wasserman Schultz off the hook. The Democrat I.T. scandal is a key to much of the corruption we see today," Trump argued. "They want to make a 'plea deal' to hide what is on their Server. Where is Server? Really bad!"

On Tuesday, The Washington Post reported that federal prosecutors have concluded an 18-month investigation and "debunked" many of the conspiracy theories in the case.

Disregarding the instruction from President Trump, the Department of Justice did cut a plea deal that involved Awan pleading guilty to a "relatively minor offense unrelated to his work on Capitol Hill: making a false statement on a bank loan application."

Prosecutors are not recommending jail time.

“The Government has uncovered no evidence that your client violated federal law with respect to the House computer systems,” prosecutors revealed in an 11-page plea agreement. “Particularly, the Government has found no evidence that your client illegally removed House data from the House network or from House Members’ offices, stole the House Democratic Caucus Server, stole or destroyed House information technology equipment, or improperly accessed or transferred government information, including classified or sensitive information.”

President Trump had been a vocal proponent of conspiracy theories involving Awan.

"The case has highlighted Trump’s willingness to lobby for specific outcomes of federal criminal investigations and to suggest a coverup by his own Department of Justice," The Post explained. "Trump also attempted to tie Awan to the hacking of the Democratic National Committee server — a breach that intelligence agencies have concluded was directed by Russia."

Awan's attorney, Christopher Gowen, slammed the "tremendous waste of law enforcement time and resources" invested in the "political prosecution" against his client.

“There has never been any missing server, smashed hard drives, blackmailed members of Congress, or breach of classified information,” lawyer Christopher Gowen said in a statement. “Yet Fox News and its media children continued to peddle a story in perfect coordination with House Republicans and the President."

Awan directly called out President Trump during his first public statements on the investigation, concluding, “The president used me to advance his political agenda."

In a December interview with The New York Times, President Trump cited the case to deny that his campaign colluded with Russia during the 2016 presidential campaign, allegations currently being investigated by special counsel Robert Mueller.

During the interview, which took place in the Grill Room of his Mar-a-Lago resort that Trump refers to as the Winter White House, Trump lashed out at Mueller's investigation.

It is, however, doubtful that today's announcement will stop the conspiracy theories.

The far-right website Twitchy slammed the "sweetheart deal" and concluded, "this won't end any of the conspiracy theories, that's for sure."