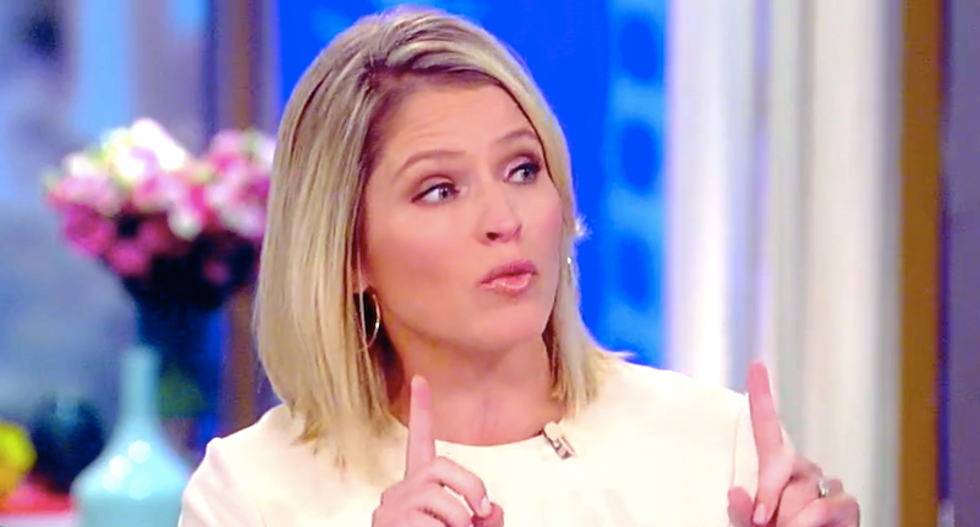 "The View" co-host Sara Haines noticed something about President Donald Trump's relationship to Russian president Vladimir Putin -- he won't use his name.

Haines went back and looked at the transcript of the joint news conference between Trump and Putin, and she noticed a subtle disparity in their relationship to one another.

"They corrected one sentence," Haines said, referring to Trump's attempt to walk back his defense of Putin against U.S. intelligence and law enforcement agencies.

"The things that were not corrected, if you read the whole transcript or you watched the video coverage, were his lines about foolishness," Haines said. "He has faith in the intelligence but he also thinks Putin is super strong. He had, like, eight bullets where he put us under Putin. It just felt like a propaganda machine."

But something jumped out at Haines as she studied the transcripts.

"The only time a first name is mentioned in the transcript was when President Putin called him Donald one time," Haines aid. "Then he replied every time with Mr. Putin."

It's actually even worse than that. The name Mr. Putin is used in the transcripts only once, by RT reporter Ilya Petrenko.

"We are glad with the outcome of our first full-scale meeting because previously we only had a chance to talk briefly on international fora," Putin said. "We had a good conversation with President Trump, and I hope that we start to understand each other better. And I'm grateful to Donald for it."

The two men referred to one another as President Trump or President Putin numerous times, while Trump three times deferred to Putin as "the president" when asked about the possible extradition of 12 Russian nationals indicted in the special counsel probe.

"Frankly, I'm going to let the president speak to the second part of your question," Trump said. "But just to say it one time again, and I say it all the time: There was no collusion. I didn't know the president. There was nobody to collude with. There was no collusion with the campaign. And every time you hear all of these -- you know, 12 and 14 -- it's stuff that has nothing to do -- and frankly, they admit, these are not people involved in the campaign."

Co-host Joy Behar was struck by the apparent imbalance in respect the Russian president had for his American counterpart.

"The puppet is supposed to be nice to the string master," Behar said.