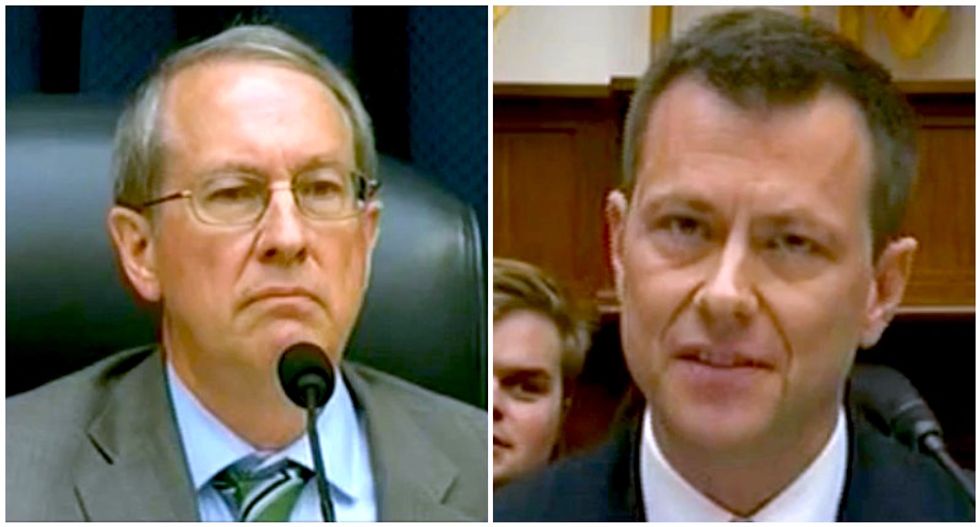 Goodlatte correctly claimed congressional authority over the FBI, and then insisted that Strzok was testifying before the House Judiciary Committee both voluntarily and under subpoena.

"You are here under subpoena," Goodlatte said. "I know you've come voluntarily, in your opinion, but you're also under subpoena, also an exercise of Congress' constitutional authority. Which takes precedent? FBI policy or the United States Constitution?"

Strzok agreed the Constitution always took precedence, but disagreed that he was under subpoena.

"My understanding is, I am not here under subpoena, that I am here voluntarily," Strzok said. "I understand the subpoena was issued for my prior closed interview, but not for this session today."

Goodlatte, who is an attorney, insisted a subpoena was issued and accepted, and then compared the FBI agent's private political statements to a juror's racist comments during deliberations, which the U.S. Supreme Court ruled last year violated the right to a fair trial.

"Mr. Chairman, I think you're mixing apples and oranges," Strzok said. "I'm not an attorney and I am not familiar with that Supreme Court ruling, but based on what you said, protected categories -- race, gender, ethnicity, sexual orientation, religion -- are matters we and the government may not be discriminated against based on their role one way or the other in one of those categories."

"That's different from political belief or opinion," he added. "That, on the other hand, is encouraged, is protected by the First Amendment."

Strzok agreed that special counsel Robert Mueller removed him from the Russia investigation after learning of his politically charged texts to fellow agent Lisa Page, and explained to the lawmaker why his messages did not violate the Hatch Act prohibiting political activity by some federal employees.

"Political speech, political thought is protected," Strzok said. "The courts have recognized, the Constitution recognizes we all have political belief, and so when it comes to the expression of that political belief, that's something this body under the Hatch Act enumerated the categories of what was prohibited and then expressly stated that if it is not prohibited, then it is expressly encouraged."

"It's an impossible definition to say people must not have political opinion," he continued. "Everyone does, of course they do. The test is whether or not that is left behind when you're doing your job."

He then moved on to the Virginia Republican's comparison of FBI agents to jurors.

"To your question of whether or not I would express that in front of a jury, of course I wouldn't -- that would be inappropriate," Strzok said. "As to your question of whether each and every one of those jurors when they go home and they're sitting in their back yard with a friend has a political opinion? My answer would be undoubtedly, almost, if not all of those jurors would."

Goodlatte seemed to sense a "gotcha" moment, and reminded Strzok that jurors are ordered by the court not to discuss the case they're hearing outside the courtroom.

"Sir, I appreciate that concern, but what I'm telling you is there's a vast difference in my mind between an action as a juror being instructed by a judge not to discuss the matters of a trial compared to a citizen of the United States of America discussing his (political views)."