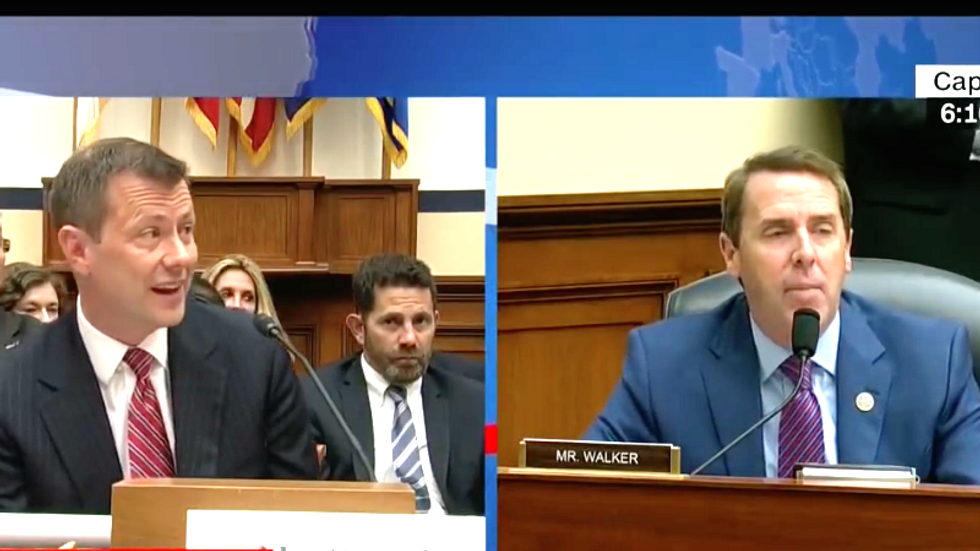 FBI agent Peter Strzok said he was "highly offended" during a congressional hearing on Thursday after Rep. Mark Walker (R-NC) questioned his integrity.

Congressman Walker attempted to call him lazy because he sent thousands of text messages within a week.

“50,000 texts?” Walker asked. “James Comey has talked about how the investigative team was the A-team, spending every waking moment to complete the investigation. How does this statement square up with the amount of time you seem to spend texting Lisa Paige on working days?”

Strzok said the text messages were mainly work related, and exploded on Walker for questioning his work effort.

“The majority of those texts were work related matters,” Strzok said. "I can assure you those texts represent work,  and work that was going on frequently from 5:00 am in the morning until 11:00 pm at night.”

Despite his comment, Walker continued to attack his character. At this point, Strzok took the lawmaker to task telling him he found his comments "insulting."

“I am here under oath. I am not lying. I have never lied under oath and I never will. the insinuation -- not even the insinuation, the direct comment that you somehow say you have an integrity issue is insulting. I take offense. It is incorrect,” Strzok said.

Walker responded: "I never mentioned your personal life. I just simply said the amount of time you were spending on the taxpayers dollar wasting it texting back and forth is a problem."