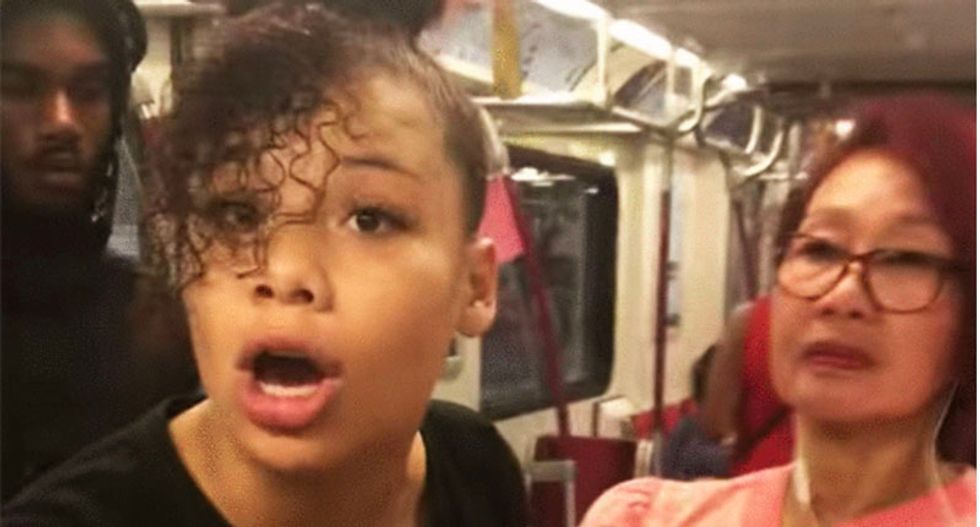 In a video uploaded to YouTube, a young woman on a Toronto subway car can be seen chasing the victim of her racist rant to steal her phone after she realizes that she was recorded.

According to CTV, Toronto Transit passenger Margaret Anthony recorded the chase -- and subsequent theft of the cell phone -- after the younger woman accosted her victim and told her to "Go back to China."

“I noticed there was a bit of a kerfuffle and I could hear a young girl essentially screaming ‘Go back to China!’” Anthony said in an interview after the video went viral. “My blood was boiling, so I did what I thought was right and I pressed the emergency alarm.”

In the footage, you can see the attacker -- in a black Toronto Blue Jays t-shirt -- chasing her victim through the nearly empty subway car before grabbing her and attempting to wrestle the phone from her hand.

When confronted by Anthony, the assailant continues to pull at the phone before yelling, "I just want her to delete the video of me."

As Anthony calls her out for her racist comments, the younger woman suddenly gains control of the phone and bolts out the open doors of the subway with another passenger in pursuit.

According to the report, Toronto police are treating the incident as a robbery.