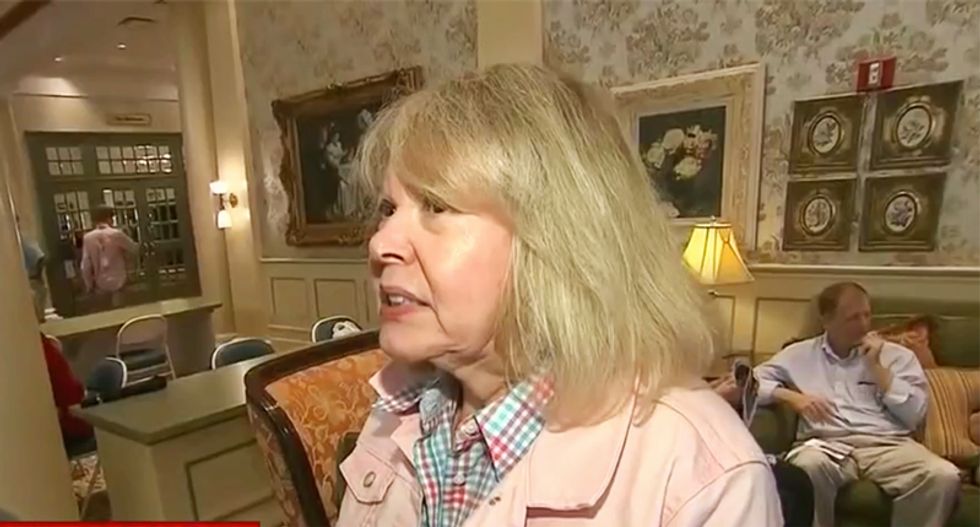 In the wake of President Donald Trump's poor showing last week where he appeared at a press conference with Russian President Vladimir Putin that was roundly criticized by both conservatives and liberals alike, CNN took their cameras to one the president's largest strongholds -- Florida retirement community  The Village -- to see if attitudes towards the president have changed.

The verdict: he's "an embarrassment," but they still think he's doing a good job.

Speaking with Sally Inberwish in a parking lot outside the enormous retirement complex, CNN reporter Gary Tuchman asked her how Trump is doing.

"He is an embarrassment to me and, as a Republican, I still feel that, you know, I just wish he would just learn to say things properly and maybe he wouldn't get himself into so much trouble," she replied.

Republican retiree Ashera Stanton was  asked about the Trump/Putin summit.

"When Donald Trump said there's blame for the united states as well as Russia, the blame on this country, does this trouble you?" Tuchman asked.

"It's Donald Trump, you know, you sort of expect that" she defended.

"But does that trouble you? do you think the united states should be blamed?" Tuchman pressed. "Should Donald Trump not have said that about his country?"

"No, I don't think the United States should be blamed," she replied. "He says a lot of stuff he should not say."

Another retiree was willing to excuse the president's bungling, saying he liked the way he "plays the press like a Stradivarius."

Asked about Trump's deference to Putin, Dick Hoffman added, "It didn't bother me a bit."

You can watch the interviews below via CNN:

Former Gov. Eric Greitens (R-MO) served in the Navy and one of his fellow servicemembers has published a video begging the Republican to get out of the Missouri Senate race.

In a video that is quickly going viral, Navy man Ken Harbaugh, who served for nine years during some of Greitens' year, called the Senate candidate a "broken man."

Uvalde officer asked permission to shoot gunman outside school but got no answer, report finds

An Uvalde police officer asked for a supervisor’s permission to shoot the gunman who would soon kill 21 people at Robb Elementary School in May before he entered the building, but the supervisor did not hear the request or responded too late, according to a report released Wednesday evaluating the law enforcement response to the shooting.

The request from the Uvalde officer, who was outside the school, about a minute before the gunman entered Robb Elementary had not been previously reported. The officer was reported to have been afraid of possibly shooting children while attempting to take out the gunman, according to the report released Wednesday by the Advanced Law Enforcement Rapid Response Training Center in San Marcos.