WATCH: White woman tells biracial family to 'get out of Berkeley' and then plays the victim when cops show up 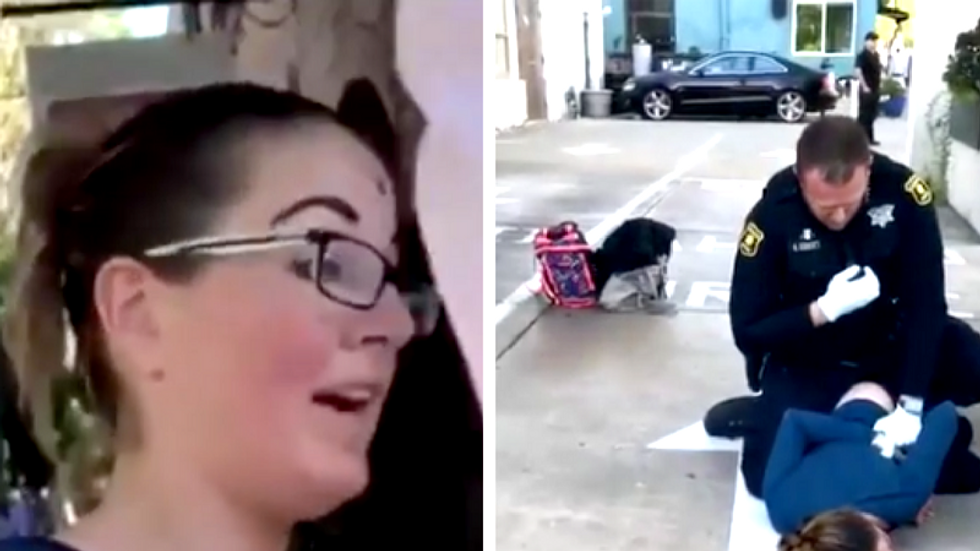 A biracial family in Berkeley, California, was out for a walk on Memorial Day weekend when a white woman began following and harassing them, according to the Berkeley Side.

While out with his family, Essex Cook, 30, noticed a white woman walking behind the group. The woman has been identified as Lauren Milewski, 31.

Milewsk began following the family and told them they were taking up too much of the sidewalk. When they offered to let her pass, she refused and began harassing them.

Cook said that he is used to dealing with racial situations, but remained calm since his family was with him, including his 2-year-old son, and pregnant girlfriend.

The boldness these days is unreal . We can’t bbq we can’t walk down the street .. like WOW Soooo this pisses us all the way off ! This video hits close to home because one of the young ladies in the video is SoOakland founders cousin @_elexxia along with @es.sex A white woman in Berkeley,Ca followed them down the street and kept telling them to “Get out of Berkeley “ and harassed them for blocks. Luckily witnesses were around that saw the interaction because the White Woman Tried to turn victim when the police arrived and tried to say my cousin and her friends were a MOB and was assaulting her #walkingwhileBLACK #thisisamaerica #berkeleyca #sobayarea #blacklivesmatter #racismissoreal @theshaderoom @theshaderoom @shaunking @troubleman31 @realdlhughley

Moments later the family noticed another white couple, who saw the entire situation, calling the police.

“When the police cars arrived, I was scared,” said his cousin, Elexia Cook. “I didn’t know what the white couple that stood there was going to say to the police, or what they said over the phone. We were scared that something else might have happened, and we would be arrested along with her until things got sorted out.”

Berkeley Police Lt. Peter Hong arrived at the scene and said that Milewski had a history of aggressive behavior. The video shows Milewski refusing arrest. No criminal charges were pressed.

Part 2. (See previous post ) The woman did get arrested after the harassment and charges will be pressed . Luckily witnesses were able to let the officers know she was harassing the group (@_elexxia @es.sex )because this could have easily went wrong. #walkingwhileblack thank you BERKELEY polive Department for FINALLY doing you job correctly #sooakland #soberkeley