Is it wrong for Sacha Baron Cohen to make fools of the unwitting? 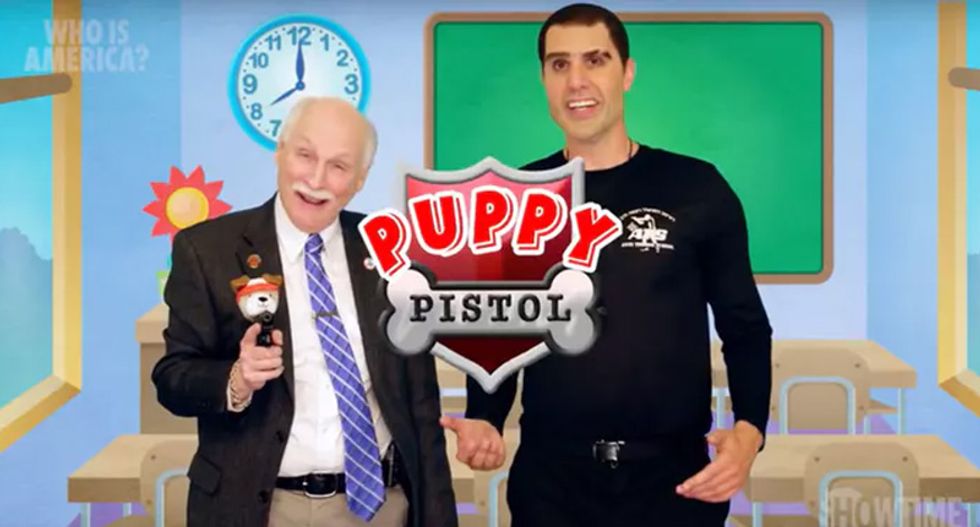 “There is no such thing as bad publicity,” as the 19th-century showman and godfather of fake publicity P T Barnum may (or may not) have once said. But some high-ranking politicos caught up in Sacha Baron Cohen’s new television comedy venture, Who is America?, already appear to be regretting the publicity that their participation has generated.

The show repeats Baron Cohen’s now-familiar faux naïve presenter shtick – see his Borat or Bruno characters – and already some interviewees, including the former governor of Alaska and reality TV celebrity Sarah Palin and disgraced judge Roy Moore, have publicly expressed their outrage at having been duped by the comedian into saying things that, presumably, they meant at the time.

Criticism mainly centres around the actor’s methods in obtaining his material, his adoption of fake personae and, in particular, his use of prosthetics to disguise his “real” identity.

A cursory glance at the still photographs from the series suggest that the make-up makes Baron Cohen look remarkably like himself, or like Sacha Baron Cohen sporting a dubious toupee and moustache combo.

There is nothing new in the phoney presenter. Such fakers have been a staple of media manipulation for years, from P T Barnum’s hoaxes, such as touting the supposedly 161-year-old nurse of George Washington to a gullible public, to News Ltd newspapers’ investigative reporter, the “Fake Sheikh”. So there should be few people who are unaware how the press or advertising works or do not know better than to trust what passes as “reportage” on face value.

On television in America, the hidden camera practical joke show Candid Camera hit the screens on ABC as early as 1948, while more recently Chris Morris’ Brass Eye in the UK or Martin Short’s Jiminy Glick in the US deploy the fake interviewer formula for comedy purposes.

Participants in Baron Cohen’s show, particularly those who enjoy a strongly mediated presence, therefore seem to have been guilty of startling naiveté – or their advisers showed a bewildering lack of judgement – in failing to fact check or to recognise even the possibility of being set up by a potential prankster.

At least for the famous players in Baron Cohen’s current game, they will have the advantage of being able to make a public acknowledgement of their gullibility in due course. A self-deprecating joke should serve the purpose of atoning for any indiscretions or unwise utterances that they may have let slip while restoring their reputation for being able to take a joke (although this may not be the case for the congressmen who appeared to support the notion of arming pre-schoolers in the first episode of Who is America?). But this is not the same for the “ordinary” Americans who featured and who may now feel that they have been too cruelly exposed.

A couple of points: first, it’s impossible to know the extent to which any of the participants were in on the joke from the start or how complicit they became in simply giving the interviewer what they assumed he wanted. Second, anyone who actively seeks their 15 minutes of fame must surely shoulder full liability when things go bad.

In the end, Baron Cohen never claims to operate as a Swiftian-type satirist. His way is not to hold up the follies of human behaviour to ridicule or contempt. The sources of his amusement are too wide-ranging and indiscriminate for that. If anything, Cohen’s consistent target is people’s hunger for, and their desire for engagement with, the media. The quest for celebrity, fame and media attention at all costs is his victim.

Send in the clowns

Rather than being a true satirist, Baron Cohen belongs more to the comic tradition of the trickster clown figure of myth and legend. The trickster, a mischief maker who sows discord and causes disruption is, nonetheless, still sanctioned by the authorities – whether these are sacred or secular in form. In Baron Cohen’s case, the higher authority is the media industry, which commissions, sanctions, produces and distributes his comedy, all the while allowing him to poke fun at figures largely created, featured or promoted by the same industry.

It is a strange irony that without media’s spin and its sanction, Baron Cohen the trickster clown could not function at all, just as his targets could themselves not fully function outside the same spin and sanction cycle.

By posing as a media insider, Baron Cohen may encourage his dupes to succumb to a level of unfortunate self exposure but, presumably, he does not force them to say anything that they do not want to say. Nor does he falsely report their comments. That said, in an era of “fake news” and denial of on-the-record facts by major world leaders, extreme or extravagant discourse that is made in public arguably no longer matters, nor is it even possible to send up. As Clodagh Harrington noted in The Conversation about Donald Trump:

As journalist Selana Zito put it in The Atlantic, liberals continue to take him literally but not seriously, while his supporters take him very seriously but not literally.

In this climate of braggadocio and playing hard and fast with literal meanings, Baron Cohen’s brand of tricksterism has surely already been co-opted into the mainstream. In our – supposedly new – “fake news” world, where opinion trumps evidence or analysis, his patsies’ unconsidered haste to share media platforms and to offer their comments to what they perceive as like-minded interlocutors must, in the end, render them fair game.

If they subsequently feel duped or regret that their own words may make them come across as less than sympathetic, well, “there’s a sucker born every minute” as P T Barnum may, or may not, have once said.

By Ian Wilkie, Lecturer in Performance, University of Salford