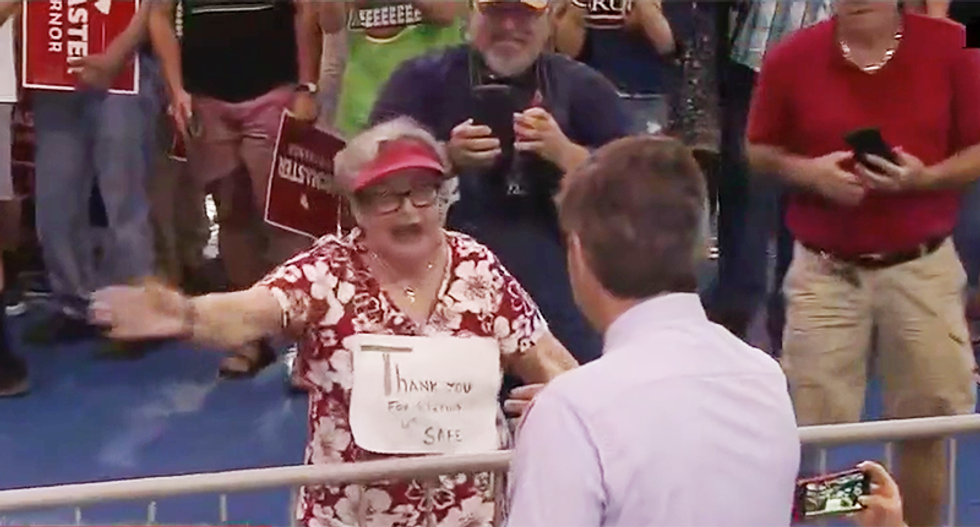 Newspapers across the country are fighting back in wake of President Donald Trump's accusation that the media is the "enemy of the people."

"There is nothing that I would want more for our Country than true FREEDOM OF THE PRESS," tweeted Trump on Thursday. "The fact is that the Press is FREE to write and say anything it wants, but much of what it says is FAKE NEWS, pushing a political agenda or just plain trying to hurt people. HONESTY WINS!"

While it might be expected to see editorials from The New York Times, The Washington Post or The Los Angeles Times, several red-state newspapers participated in the project as well. In states considered to be strongholds for Trump, newspapers are striking back. Conservative papers, some that even endorsed Trump, are standing up in the name of transparency and accountability.

Here are just a small selection of red-state newspapers across the country that are striking back in the name of truth, honesty and a free press:

"But the president’s attacks are neither fair nor accurate. He has mistaken those who disagree with him (editorially) for traitors. He has mistaken facts that are uncomfortable to him (in news stories) for sedition."

"In our business, we know how much words matter. We know, too, that Trump’s references to us as the 'enemy of the American People' are no less dangerous because they happen to be strategic. That's what Nazis called Jews."

"So when President Donald Trump uses his bully pulpit to spout such hyperbole in generic criticism of the media, he demeans the work of all journalists, including the professional reporters and editors at the Journal-World.

It’s a charlatan’s pitch. History is not on the president’s side."

"Neither is reporting on a county board funneling money to private schools, the impact of Medicaid privatization in Iowa or the effects of tariffs on Iowa farmers and livestock producers, or providing information people need to recover from floods and tornadoes, all covered by Register journalists in recent months."

After a series of stories about lead in drinking water, a local Habitat for Humanity helping buy back mortgages to help people and road rage incidents, The Tampa Bay Times explained these things are not fake news.

"Yet from Washington, President Donald Trump attacks the media that provides fact-based, independent journalism and holds the powerful to account in communities around the nation."

"None of this excuses Trump for his belligerent attitude toward the news media. The First Amendment calls for a free press, not one that is necessarily favorable or unfavorable toward the president.

"But to create that shared public understanding, media organizations need continued public support. Support your local newspaper by buying a subscription if you don’t have one, and buying one for a friend if you do."

"He calls what we produce 'fake news,' and this hurts the feelings of many folk in the nation’s newsrooms. Some of the news is faked, but most of it is not. Many readers and viewers think the reputation of the American press is indeed abysmal, and Donald Trump, smarting from pinpricks inflicted by the press, naturally took up the cudgel conveniently at hand. Now some newspapers have banded together to assert their 'collective independence.'”

"At the News-Sentinel, we take our mission to accurately report the news and serve the greater Fort Wayne area through steady, consistent leadership more seriously than ever. That’s a mission we’ve held firm to since our founding on July 6, 1833.

"We’re the trusted news source covering our region. We’ve built that trust with our readers over more than 185 years by being fair, truthful and accurate in all that we do.

"However, we’re finding that some of our work covering issues of importance to Fort Wayne now is being labeled as 'fake news.'"

"Members of the media realize that not everyone can get to those meetings or wade through those statistics. We also realize something else — the facts we uncover and the stories we produce can have a direct effect on the people we serve.

"So we spend our days and nights looking for information. Not all the facts we report are pleasant. But they help people make informed decisions.

"We are, quite simply, a community’s eyes and ears."

In another editorial the day after Trump's words, The Morning News also wrote an editorial saying, "Such a stance is repugnant, although the American people have come to expect nothing less from this president."

"But being called an enemy — and not of a politician or cause, but of the whole people of a nation — that’s something else entirely.

"It’s sinister. It’s destructive. And it must end now."