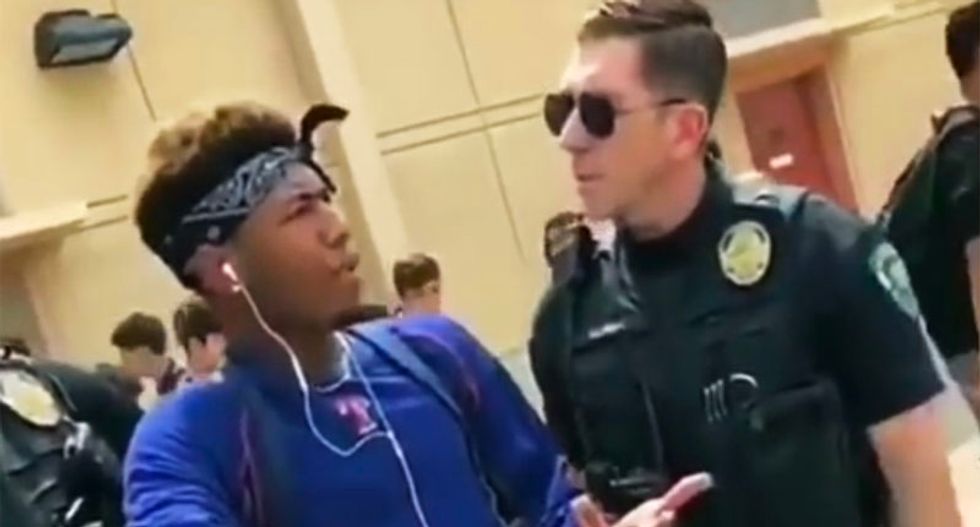 School officials at Apache Junction High School in Arizona are facing complaints and student protests after the school had police officers arrest a black student who is new to the school for wearing a bandana on campus.

According to AzCentral, the 17-year-old student identified only as Valentino was on his way to lunch when a teacher told him to take the bandana off, saying it was against the school's dress code.

When the teen refused, police were summoned as a crowd gathered wondering what the fuss was  about and the teen was grabbed by the police and removed from the campus in handcuffs.

According to Valentino, he saw students "who are usually white' wearing bandanas in a similar fashion for months, but that he was singled out by a teacher on Aug 10th.

“I told the teacher that I would remove the bandana if others did the same,” Valentino said in an interview with Yahoo. “She said, ‘If you don’t remove it, I will call the police.’ I said, ‘If you need to call them, you should,’ and walked back to my lunch table.”

"When I asked the officer what was wrong with my bandana, he said, ‘It’s blue and other people have ruined that color,’” he continued. “I pointed to a student wearing a bandana with an American flag pattern, and he said, ‘That’s for America.’”

"The refusal to respond to a reasonable request escalated to a point where some students were confusing the wearing of the bandanna with defiance and disorderly behavior," a school official said in a statement. "This particular situation became escalated when students posted videos on social media sites."

According to the report there is no mention of bandanas in the dress code, which does read the school prohibits, “the use of hand signals, graffiti, or the presence of any apparel, jewelry, accessory, or manner of dress or grooming that, by virtue of its color, arrangement, trademark, symbol, or any other attribute indicates or implies membership or affiliation with such a group.”

The student is reportedly now serving a nine-day suspension.

You can watch video of the arest below via YouTube: