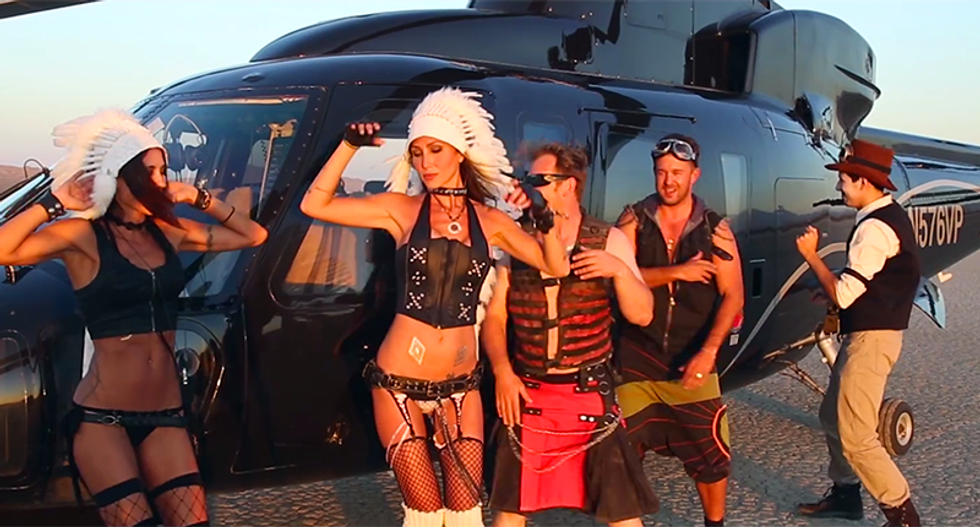 I spend a lot of my time writing and thinking about ways to foster a healthier world, economically, socially, environmentally, and spiritually. Burning Man has always seemed like something I should support. I have good friends who go every year, and one of my dearest friends, whom I have known since I was 14 years old, is one of Burning Man’s leaders who not only helps run the show during the party, but works out there on the Playa all year long.

So it’s with some trepidation that I write this column.

You see, I’m always skeptical of any gathering of tens of thousands of white people. Only about 1 percent of Burning Man attendees are black. I can hear my white friends, insisting the spirit of Burning Man is embracing. But the reality is the vast majority of the culture is white culture. It drips, in many ways, of the worst kind of appropriation: The grasping for something authentic in an ever-disorienting and colonial, fabricated and commodified existence.

And that, of course, is what Burning Man is meant to alleviate. Many of the attendees are seeking relief from their day-to-day existence: Their bullshit jobs, their lack of family or other community, their extravagant, shallow, moneyed existences in Silicon Valley. It gives me hope, though, to know that people are seeking respite, and that so many people are there to help them find relief.

The notorious Burning Man party in rural Nevada is meant to foster “grand, awe-inspiring and joyful ways that lift the human spirit, address social problems and inspire a sense of culture, community and personal engagement.”

The community builds this upon ten principles, of which “Radical Inclusion” is the first. Yet just to buy tickets, you are quizzed on what Burning Man is. Correct answer: It’s a community. Ok, but it’s a community that requires you purchase tickets that range in price from $425-$1,200. Some “low-income” tickets are available, for just $190. Exclusive gym memberships frequented by pro athletes can cost less.

It’s no wonder, then, that Burning Man isn’t popular in low-income neighborhoods. Low-income folks—especially people of color—are, from the get-go, excluded from the party. An extra $190 will pay a water bill in Detroit, buy bottled water in Flint, or buy food for a homeless family in Cleveland. Never mind the cost of travel: In Michigan, people pay for gas by returning pop cans to the party store at ten cents a pop. A case of beer, returned empty, is worth almost a gallon of gas. Not much, but enough to get to work, fingers crossed. But certainly it’s not enough to get cross-country to a “community.”

Other principles of the Playa include “radical self-reliance,” “gifting” and “decommodification”—it is, essentially, a pop-up gift economy. Which is great, and helps everyone in attendance. In fact, all the principles look and sound like a movement toward a better world: Radical self-expression, communal effort, civic responsibility, leaving no trace, and participation. From these ideas have sprung forth many righteous endeavors in the real world… right?

Yet many of the Burning Man community find their own, special, way to honor the principles, including bringing their own servants to the party, some spending a quarter of a million dollars—on one chef—to help them live the principles while they’re there.

The party, started back in the 1980s, once attracted homeless Dead Heads. Now it is the place for the 1 percent.

So the question becomes: If the 1 percent are partying and agreeing with and living by the principles for the time they’re at Burning Man, how does that translate into their workplaces in Silicon Valley? Wall Street?

I might suggest that, in fact, the whole experience is a demonstration in “immediacy,” the tenth principle of the Playa. It also seems to inspire the entire supposed essence of Burning Man to be easily shed and left behind with the final burn.

Of course, the wealthy keep the spirit of giving going, no doubt—perhaps giving their friend a location to open their new restaurant, or perhaps a vacation home in Italy for the summer, or perhaps a yacht to spend time on in the Greek Islands. But how do these principles, this festival of culture, trickle down?

But here’s what I do know to be true: There are people, across the country and around the world, who aren’t working for companies that use slave labor, mine people for data, or rob them of clean drinking water—which, perhaps not surprisingly, some Burning Man community members do. They aren’t passing bullshit jobs on to underlings, and they aren’t traveling thousands of miles to party with other rich white people.

Rather, they are living and creating art in Dayton, Ohio; Louisville, Kentucky; and Fort Smith, Arkansas. They are advocating for structural and institutional change in Oklahoma, Florida, North Dakota, and Hawai’i. They are building their own homes with the “leave no trace” principle, and they are gifting as a means of communal support in Detroit.

What I might humbly suggest, then, is that Burning Man is over. What is in, from the ground up, is the spirit of community, meant to foster decommodification, environmental stability, and clean, soulful and artistic living, in your own backyard.

And that’s happening every day, without Burning Man, expensive admittance tickets, and quarter of a million dollar chefs.

This article was produced by Local Peace Economy, a project of the Independent Media Institute.

Despair is worse after a brief period of hope. I don't know about you, but I was elated earlier this spring when it seemed as if Trump and COVID were gone, and Biden seemed surprisingly able to get the nation rapidly back on track.

While praising the Democrat-led U.S. House of Representatives on Thursday for passing a spending bill without the Hyde Amendment for the first time in decades, reproductive rights and justice advocates sounded the alarm over 228 congressional Republicans urging the U.S. Supreme Court to overturn Roe v. Wade.

Texas Attorney General Ken Paxton, an ardent Trump supporter who was the lead plaintiff in a last-ditch Supreme Court case aimed at overturning the 2020 election, appears to be backing away from his past claims of widespread election fraud. Facing discipline or even potential disbarment in Texas, Paxton now merely alleges that there were "irregularities" in battleground states, while still suggesting those could somehow have affected the overall result

Paxton's apparent retreat came earlier this month in response to an array of grievances filed by several members of the Texas bar: retired lawyer Neil Cohen; Kevin Moran, president of the Galveston Island Democrats; former Texas Court of Appeals Chief Justice David Chew; and Dr. Brynne VanHettinga. In their initial complaint, the group argued that Paxton should face professional discipline over his bid to undermine the 2020 presidential election, saying that Paxton's December petition to the U.S. Supreme Court, arguing that President Biden's victory should be set aside, was both frivolous and unethical.