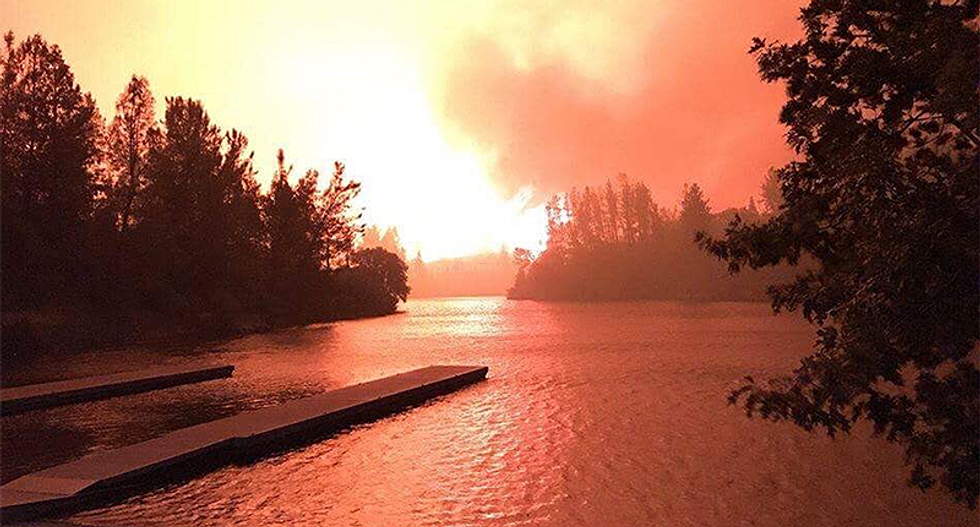 On Monday, President Donald Trump repeated a conspiracy theory he launched Sunday, saying that the California government is diverting water from fighting the fires into the Pacific Ocean.

"California wildfires are being magnified & made so much worse by the bad environmental laws which aren’t allowing massive amounts of readily available water to be properly utilized. It is being diverted into the Pacific Ocean. Must also tree clear to stop fire from spreading!" Trump tweeted Monday.

California wildfires are being magnified & made so much worse by the bad environmental laws which aren’t allowing m… https://t.co/V94EEYqoHv
— Donald J. Trump (@Donald J. Trump) 1533592422.0

"There is nothing to release," the statement read. "There are no specifics to the tweet. We have plenty of water to fight these fires. The Carr fire has Whiskeytown Lake, Shasta Lake and Trinity Lake just to name a few water sources. The Mendocino Complex is next to Clearlake Lake. The current weather is causing more severe and destructive fires."

The Los Angeles Times explained that the likeliest explanation for Trump's tweet is that he's confused about stories from Central Valley farmers about irrigation. Trump friend Rep. Devin Nunes (R-CA) has claimed in the past that Communists are stealing water from farmers in the area.

"Honestly, when you hear a story like this where the government is not working for the people and environmental extremism is taken over to the point where literally farmers are denied the very water they need to feed the rest of the country it's about time the people in Washington get to hear from the hard-working people," Hannity said.

According to the LA Times and CalFire, however, the water used for irrigation in Central Valley farms isn't the water that would be used for fighting fires outside of Redding.

At the same time, neither fire agencies nor firefighters have complained about a lack of water. If anything, it's a lack of manpower for exhausted firefighters. Thus far Australia, New Zealand and Mexico have all sent fire and rescue workers to help give California some relief.