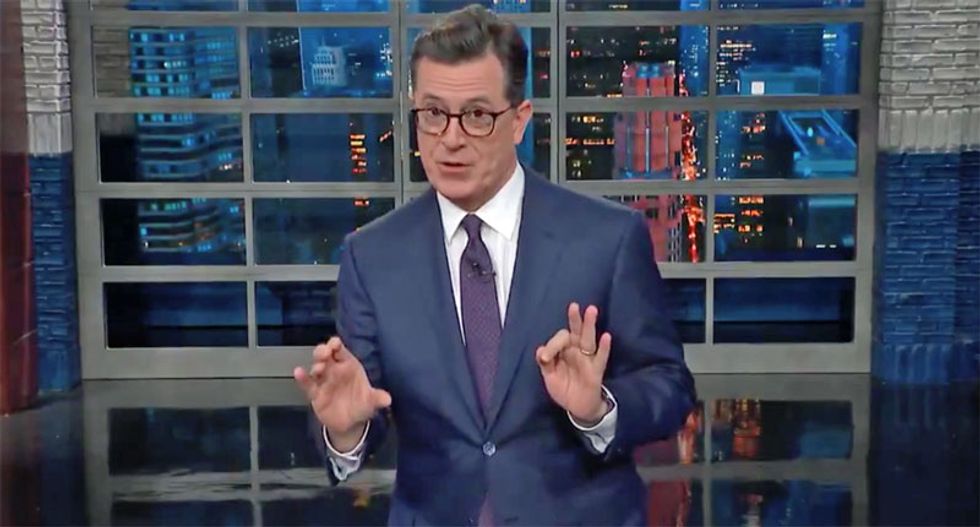 Sanders was asked if she can guarantee that a tape doesn't exist of the president saying the N-word. She could not. Instead, she said that she didn't have to because the president already answered that question on Twitter.

"I know, it's terrible. If this shocking allegation is true, it would undeniably make some of his fans happy," Colbert said. "Others would go, 'I don't like that he's a racist, but, you know, taxes.'"

He characterized her briefing as "coming down on the side of....eh."

When reporters asked her to confirm that she can't guarantee it, Sanders said she hasn't "been in every single room."

"Is there a special room where he says it?" Colbert wanted to know. "Please, please, please tell me it's not the Lincoln Bedroom."

Colbert then knocked the president' tweet Monday evening saying that he spoke to former executive producer Mark Burnett, who said that there is no tape where he used the N-word.

"Well, that settles it. A guy called him and told him it's not on tape," Colbert said. "You know what they say, 'If a tree falls in the forest and there's no one there to hear it say the N-word, is it racist?"

He went on to agree with "HuckaSand" that Trump is an "equal opportunity insulter."

Trump then claimed that the word wasn't even in his vocabulary, which Colbert said probably means the word is where his taxes are stashed.

When it came to Trump's use of the word "dog" to attack Omarosa, Colbert said that they found several cases in which Trump has called someone a dog. The attack was so frequent that it made the CBS host wonder why he hates dogs so much.

"He should love dogs. You don't have to pay to watch them pee," he joked.