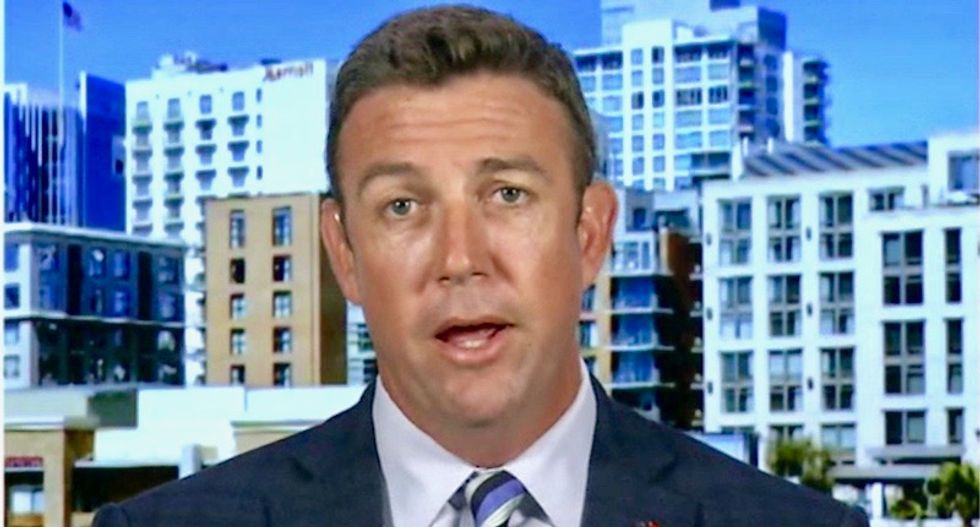 Embattled Rep. Duncan Hunter (R-CA) appeared on Fox News Thursday night and denied all wrongdoing over charges that he misspent a quarter of a million dollars of campaign money on personal expenses such as a vacation to Italy, dental work and flying the family's pet bunny across the country.

In the interview, the Republican from conservative eastern San Diego County, who was gifted his seat in Congress by his father, defended himself from all accusations.

Asked point-blank if he was guilty, Hunter denied any and all wrongdoing.

"No, in fact, the events you were mentioning there were fundraisers," he said. "That's how people get to hear me and hear what I have to say."

Hunter attacked the Trump-appointed U.S. Attorney for the Southern District of California, Adam Braverman, who is prosecuting him and complained that he doesn't have time to fight the charges before his election.

Hunter did admit to saying "f*ck the Navy" after he was unable to arrange a base tour that was allegedly to be used as a cover story for his family's vacation to Italy.

Hunter blamed his wife for anything amiss.

"When I went to Iraq in 2003, the first time, I gave her power of attorney and she handled my finances throughout my whole military career and she continued that when I got to Congress," he said. "Whatever she did, that will be looked at too, I'm sure. But I didn't do it. I didn't spend any money illegally. I didn't use campaign money, especially for Wounded Warriors, there's no way."

Hunter then attacked his "socialist Democrat opponent" and complained of the cost of living in Southern California when asked if his salary was sufficient.

The number of people at risk of starvation in the drought-ravaged Horn of Africa has increased to 22 million, the UN's World Food Programme (WFP) said Friday.

Years of insufficient rainfall across Kenya, Somalia and Ethiopia have caused the worst drought in 40 years and conditions akin to famine in the hardest-hit areas, aid groups say.

Former President Donald Trump claims the documents confiscated by the Federal Bureau of Investigations (FBI) were all "'declassified' and in 'secure storage'” at his Mar-a-Lago.

However, according to Yahoo! News, one of the attorneys representing the former president didn't express the same level of confidence in how "secure" the storage unit was where the documents had been stored.