'Everybody strap in': MSNBC's Mika and Donny Deutsch warn Trump will put America in danger with 'nutso' distraction 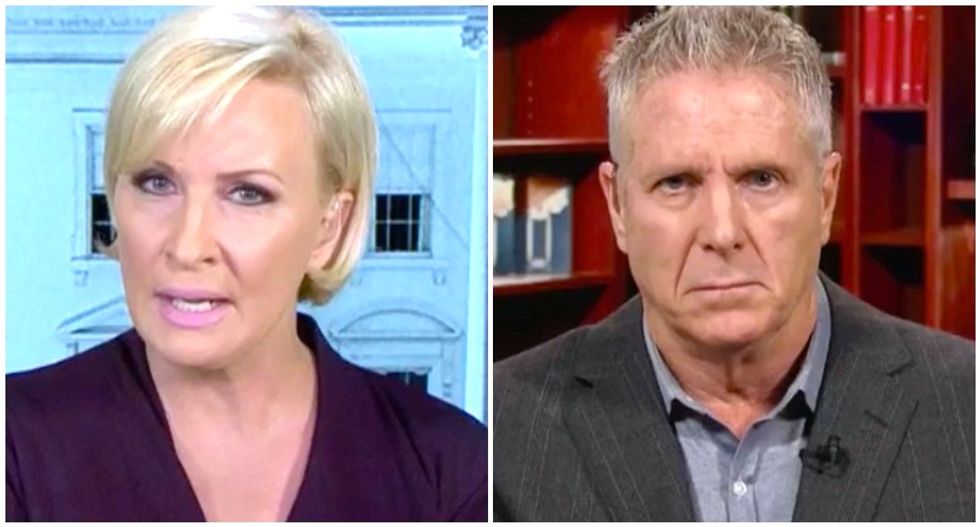 MSNBC's Mika Brzezinski and Donny Deutsch have each personally known President Donald Trump for years, and they're worried about his reaction to the guilty pleas and convictions of two of his close associates.

"Trump prides himself, when he gets punched, he punches back," Deutsch said. "Yesterday wasn't just a punch, yesterday was a missile shot at his head, yet at his rally last night, nothing. That's an interesting tell."

Trump always makes a show of fighting back against any threat to him, but Deutsch is concerned that he was somewhat subdued at his West Virginia campaign rally.

"Nothing -- he passed," Deutsch said. "He took kind of the weak road."

But that only worries Deutsch more, because he said Trump is willing to do literally anything to protect himself from legal jeopardy.

"There is nothing, nothing that is beyond Donald Trump doing or acting out to save Donald Trump," Deutsch said. "I actually believe Donald Trump would start an international incident -- I know this is very controversial -- to protect himself."

He said the president was cornered, and he's worried what Trump will do as Cohen and Manafort face sentencing, along with former national security adviser Michael Flynn, who agreed to cooperate with the special counsel probe after pleading guilty.

"Everybody always says, well, Donald Trump bounces back and he's Teflon," Deutsch said. "This is not Teflon. He is an unnamed co-conspiracy, basically, in a felony crime, and we have not seen Donald Trump in this instance, and I am frightened."

Brzezinski said Trump would try to conjure up a distraction from the avalanche of bad news that landed on his presidency.

"I will predict that he will sit down sooner rather than later, like in a matter of moments even, with his friends at Fox (News) and his most comfortable place, and he will do in nutso deflection that possibly could put our country in danger in some way, shape or form that will cause lots of ripple effects on Capitol Hill," Brzezinski said.

"Most people who read history, who know history, know that this man is very possibly -- like we're in the high 90 percent -- being used as a useful idiot by (Vladimir) Putin, and now we're waiting for the next nutso deflection by this president who has just endured a one-two punch. The worst day of his presidency and also probably personally, as well. So everybody strap in."