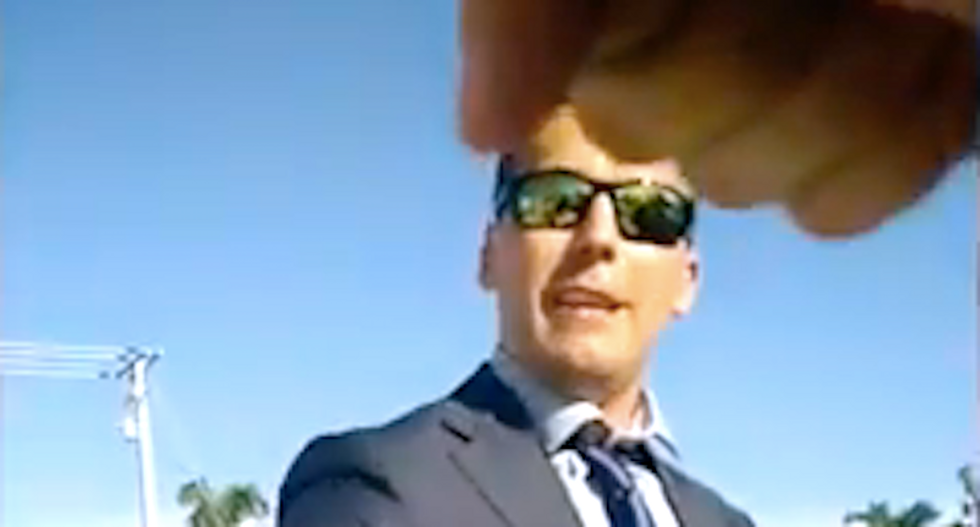 A Florida police department is defending one of its officers after he exchanged a fist bump with a white supremacist carrying an anti-Semitic sign.

Video of the Aug. 13 encounter was widely shared on social media, but Boca Raton police said the footage was "heavily edited" and misleading, reported the Palm Beach Post.

White nationalist Patrick Little, who is a known agitator to local police, stood at an intersection that day holding a sign reading, "Jews rape kids," when another man grabbed the cardboard placard and tore it up.

Reyes was released at the scene with a notice to appear in court.

A short video edited from a 20-minute clip showed the officer, whose name has not been released, briefly touch fists with Little -- and social media users condemned his actions during the incident.

But police said the short clip does not accurately depict the encounter, and they have released body camera video in hopes of clarifying the situation.

The longer video shows the officer asking Little to take a photo of his sign for evidence, and the white nationalist gadfly offers his hand to the officer and introduces himself.

The officer says he's sick and declines his handshake, but instead offers a brief fist bump.

Boca Raton police also explained that Little was not arrested, while Reyes was, because he had a constitutional right to demonstrate.

“The person with the sign wasn't arrested as it's his right to protest in public no matter how offensive we find it," the department posted on Twitter. "And yes we found it offensive."