'The Forrest Gump of collusion': Samantha Bee mocks Don Jr. for being the one who might bring down Trump's presidency 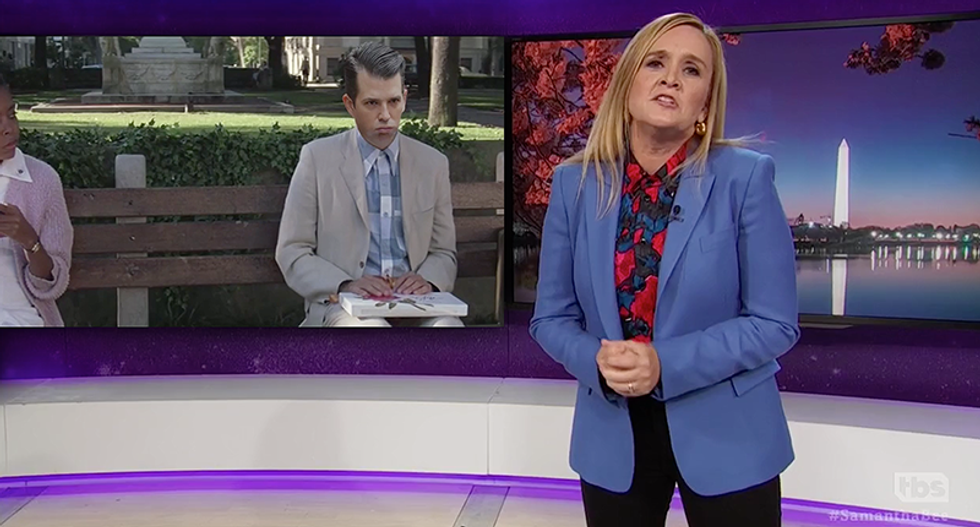 “Trump seems pretty comfortable letting [Paul] Manafort twist in the wind,” Bee observed as the Virginia trial moves forward. “But would he do the same thing to his own flesh and blood? It kinda seems like it.”

Bee cited the tweet from last weekend from the president where he acknowledges that his "wonderful" son did meet with Russian operatives at Trump Tower under the pretense of obtaining dirt on Hillary Clinton.

“It must have been a shocking moment for Don Jr. when his father threw him under the bus,” Bee continued. “He probably thought, ‘Oh my god, Dad knows I exist! We shouldn’t be surprised to see Trump’s least favorite non-Tiffany child at the center of this scandal because he’s at the center of pretty much every Trump scandal. If Donald Trump is the Death Star, Don Jr. is the exhaust port.”

Bee went on to explain how Trump Jr. has “further befouled his dad’s already soiled name,” from his “shady business empire” to his the increasing conflicts of interest. “Of course, of all the Trump scandals that Donny has bungled into, none is more important/stupid than his interactions with Russia.”

Bee also brought up the meeting between Trump Jr. and alleged Russian agent Maria Butina during the NRA dinner prior to the 2016 election.

“Any time there was collusion going on, Donny was there. He shows up everywhere. He’s like the Forrest Gump of collusion," she said.

“This sad, sticky wad of congealed hair gel has spent his whole life seeking his dad’s approval and failing at it,” Bee psychoanalyzed. “And now he might be the one to bring down Trump’s presidency. So keep up the good work, buddy, we’re all rooting for you.”