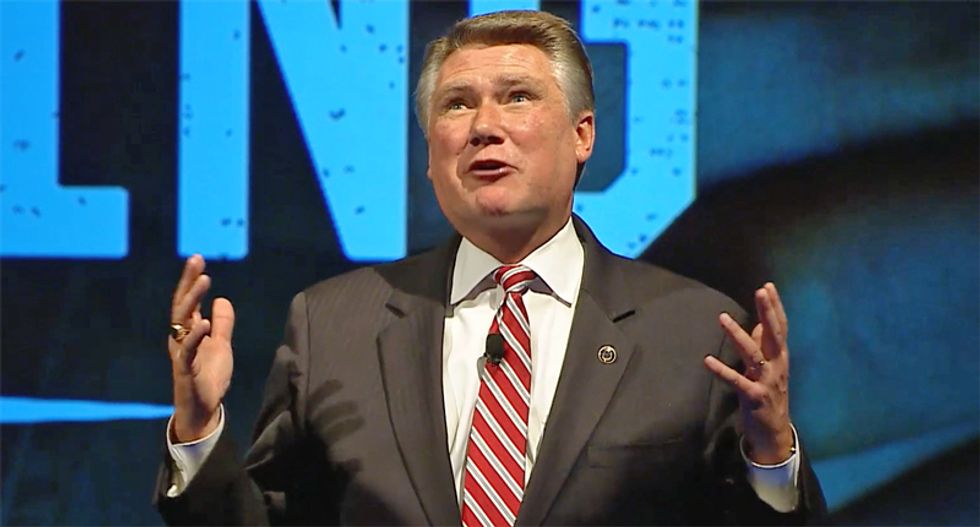 The North Carolina pastor who ousted Rep. Robert Pittenger (R-NC) in the Republican Party primary for the state's ninth congressional district says his past sermons urging wives to submit to their husbands were not about inequality.

In an interview with Roll Call, Mark Harris distanced his campaign from his views of a biblical hierarchy.

“Many marriages could save beaucoups of marriage counseling money if they would just understand; husbands love your wives even as Christ loved the church. Wives submit yourselves unto your own husbands as unto the Lord,” he said in a February 2013 sermon.

In a November 2014 sermon, he said wives should submit, “because the Lord ordained it.”

“So get over this inequality thing — because that’s not the point of submission,” he said.

Harris is now trying to distance himself from his hierarchy.

“I say [to the husband], ‘Here’s how this works. You’ve got to love your wife with an incredible love that can only come through Christ,’” he told Roll Call. “It’s really submitting one to another in a relationship.”

Pastor Harris would cite Ephesians 5:22 demanding that "wives, submit yourselves unto your own husbands, as unto the Lord."

“When you continue to emphasize wives, you sure set yourself to be saying, ‘Put up with abuse,’” she said.

This is not the first time that the congressional candidate's views on women have come under fire.

In June, the Charlotte Observer issued an editorial on the "a bit outdated" views of the former Baptist minister.

The newspaper listed some of his "insights" from a May 2013 sermon on the "timeless principles" of "biblical womanhood."

“Even basic things, like how to prepare a meal, how to sew on a button, how to keep a home, how to respond to a husbands, just basic things; we’ve lost them," Harris said in the sermon.

“What is at the core of what you were created to be?" he asked. "A supporter, a nurturer, a caregiver. Ladies, listen, that’s your essential calling by God.”

“Almost to a person every mom in the 9th District … would agree that there is no higher calling than being a mother and a wife … (or) a husband and a father," Yates told Observer reporter Jim Morrill.

Dan McCready, the Democratic Party nominee facing Harris in the 9th district, has been campaigning hard for female voters in response to the sermons.

Mark Harris' vision for women might have a place in history books, but it has no place in Washington. These are the… https://t.co/9cqp4mjkLk
— Dan McCready (@Dan McCready)1530837296.0

As a Christian, I believe that we are all created in God’s image. That means men and women are equally valuable and… https://t.co/7meQ5rDvQu
— Dan McCready (@Dan McCready)1530894117.0