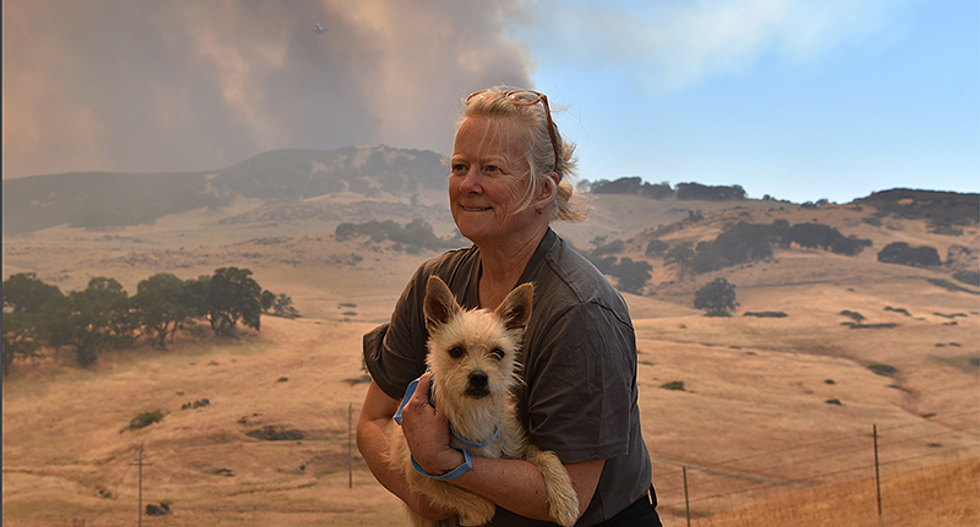 California now has four major fires burning across the state.

According to ABC7News, the Carr Fire is at least 35 percent contained but has destroyed at least 115,538 acres. At least 1,018 homes have been burned in and around Redding, California.

The Mendocino Complex Fire, burning to the southwest of the Carr fire, is the one that exploded overnight, growing about 80 percent. CNN reported Tuesday that two fires -- the Ranch Fire and the River Fire -- merged to burn at least 283,800 acres. As of Monday night, 30 percent was contained and 75 homes had been destroyed.

South of those fires is the Ferguson fire, in the Central Valley and the Cranston fire in southern California. They're contained at 39 percent and 80 percent respectively. These four are only four of the many fires burning throughout California this week. 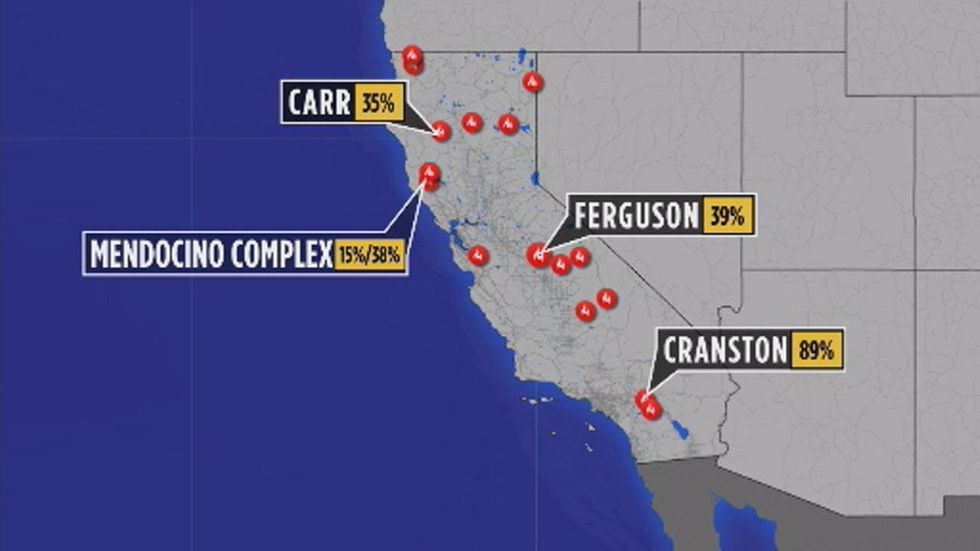 So far, sadly seven people have been killed and more than 38,000 Californians have been displaced due to the fires.

Here is a list of places where you can donate to help those impacted by this disaster.

You can see the most heartbreaking photos that capture this horrific disaster below:

The fire season out west has gotten to be terrifying in the last decade. As global warming dries out the plant life… https://t.co/KTNGpUZoQA
— Muckmaker™ (@Muckmaker™)1533683139.0

I would like everyone to stop and take a look at what the firefighters in California are facing right now. I have s… https://t.co/bSYYQCbKmc
— Tony (@Tony)1532934732.0

Seven dead, homes in ruins—here are images from the Mendocino Complex Fire, the largest raging fire in recorded Cal… https://t.co/Mj2sGjIKfm
— The Daily Beast (@The Daily Beast)1533661209.0

This is #climatechange! California’s recent forest fires are a terrifying glimpse into our future. We were warned t… https://t.co/x718Qub8AL
— Sean Bothwell (@Sean Bothwell)1533606920.0

This is #climatechange! California’s recent forest fires are a terrifying glimpse into our future. We were warned t… https://t.co/khAkqN7XFl
— CA Waterkeepers (@CA Waterkeepers)1533252969.0

Clear Lake, California. @realDonaldTrump Have you heard that there are fires in California? ACT PRESIDENTIAL!!… https://t.co/AMwt3gxNoc
— Grild Cheez (@Grild Cheez)1533408666.0

Merciful Father in heaven, look down in Your love upon all those who protect us and ours from the ravages of fire and flame. Grant them the courage and skills to carry out their duties well and safely. When they must go into the face of danger, be by their side in the smoke and flames. Watch over their families, ever reminding them that those who fight fire are also in Your loving care. This we ask in the name of Jesus Christ, our Lord and Saviour. Amen. #californiafires #firefighter #sayaprayer #fireseason

sunrise in my classroom #nofilter #californiafires

#tubbsfire My moms & grandparents home in the country of many years. #sonomastrong #californiafires

As of today, Yosemite National Park has been closed indefinitely. 🔥The #fergusonfire is now one of the largest fires in the history of California🔥 Sending positive vibes to all the firefighters (especially my boy @aut_mann ) trying to contain the blaze and the families being effected. On a positive note - Our last trip to Yosemite included some quality time at the tip of Taft Point (and we got to chill with this bird 🕊️) The views up here are 🍻/10. James has finished editing the footage we took of our adventure. I'll post up the video in the next few days!

Our hearts are broken. The historic Dardanelle Resort, built in 1923, has burned to the ground. Some of the tiny cabins were built in the 1880’s. ⠀⠀⠀⠀⠀⠀⠀⠀⠀ ⠀⠀⠀⠀⠀⠀⠀⠀⠀ We weren’t originally supposed to find this place. We took Highway 108 through Stanislaus National Forest after a mudslide blocked our route through Yosemite, which was (and still is) also on fire. We would have never seen this incredible stretch of our home. It immediately became one of our favorite discoveries on our #roadtrip. ⠀⠀⠀⠀⠀⠀⠀⠀⠀ ⠀⠀⠀⠀⠀⠀⠀⠀ Dardanelle Resort was a little sanctuary within the valley. The family that just purchased the space filled up our gas tank and welcomed us to their party in back. We sat at the outdoor bar, taking in the whole scene. Children were playing and bouncing off the swings. The owner told us his plans of opening the resort for the first time this winter for people to enjoy, considering the highway is typically impassable under 15ft of snow. The wind gently blew through the giant pines towering above, as the sun was setting beyond the mountains. It was surreal. ⠀⠀⠀⠀⠀⠀⠀⠀⠀⠀⠀⠀⠀⠀⠀⠀⠀⠀⠀⠀⠀⠀⠀ Our hopes and prayers are with the family. And with everyone in this sacred and historic stretch of California. We hope they rebuild, we will be there to celebrate the rebirth. For now we mourn a sacred place. ⠀⠀⠀⠀⠀⠀⠀⠀⠀ •⠀⠀⠀⠀⠀⠀⠀⠀⠀ •⠀⠀⠀⠀⠀⠀⠀⠀⠀ •⠀⠀⠀⠀⠀⠀⠀⠀⠀ #dardanelleresort #donnellfire #california #californiafires #stanislausnationalforest #wildfire #prayforrain #heartbroken

So we came across this dog yesterday when we were scouting. ⚠️ Graphic Content Warning ⚠️ To me this whole situation really brings it home. We all have dogs, we all love dogs. We see the fires but we don’t always grasp the devastation. This poor boy was burnt all over, his paws crisped and smoking. He had walked up to this man, one of his neighbors. Ken made a little bed for him, and was caring for him even though Ken had earlier in the day watched his own house burn to the ground. He was doing his best to stay positive, and asked for nothing from us... even though he had lost everything and was giving whatever he had to this poor dog. None of us knew what we could or should do for this dog, so we agreed to bring him back some medical supplies and food, and to call my small animal vet, Redwood Veterinary in Santa Rosa, to see how to treat him, especially since most of the veterinary hospitals nearby were either evacuated or closed because it was after hours. We couldn’t get ahold of who we thought the owner was, so this dog became my mission. I haven’t personally came across an animal like this before. We are usually getting them out early, and even if it’s close, we try our best to avoid animals being in this kind of pain. He sat there and let us do anything we needed, and was such a good dog. Update to follow. #norcallivestockevac #teambadass #mustlovedogs #bigorsmallwehaulemall

BREAKING NEWS: As wildfires rage in Northern #California, the ASPCA is on the ground rescuing and sheltering animals in desperate need. Our responders are leading field rescues, searching for animals left behind and helping local agencies care for animals displaced by the fire. Please make an urgent gift today so we can continue this work and all our lifesaving efforts: aspca.org/FireRescue (LINK IN BIO) #aspca