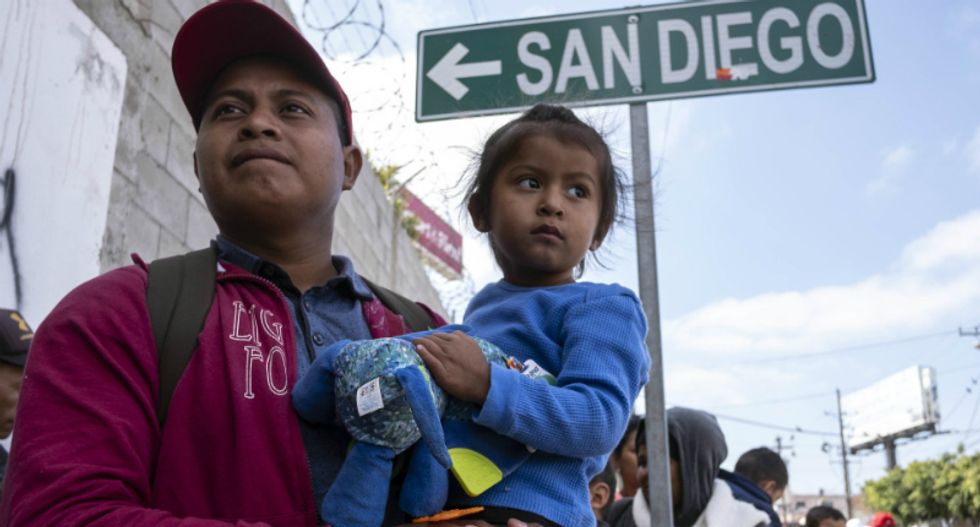 Central American migrants traveling in the "Migrant Via Crucis" line up outside Padre Chava's soup kitchen in Tijuana, Mexico for breakfast and legal counseling on April 27, 2018. Image via Guillermo Arias/AFP.

A federal judge on Friday described as “unacceptable” the U.S. government’s progress in reuniting immigrant children in the United States with deported parents and ordered the government to appoint a person to take charge of its efforts.

“This is going to be a significant undertaking and it’s clear there has to be one person in charge,” said U.S. District Judge Dana Sabraw at a hearing in San Diego.

Sabraw in June ordered the government to begin reuniting some 2,500 children that officials separated from their parents after they crossed the U.S.-Mexican border.

The families were separated as part of a “zero tolerance” U.S. government policy toward illegal immigration that began in early May. Many of them had crossed the border illegally, while others had sought asylum. About 1,900 children have since been reconnected with their parents or a sponsor.

On Thursday, the government proposed that non-profit groups should take the lead in locating as many as 500 parents deported or removed from the United States without their children.

At Friday’s hearing, Sabraw said it was it was “100 percent the responsibility of the administration” to reunite those families.

Sabraw also noted that as few as 12 of the 500 parents in question have been located.

“That is just unacceptable at this point,” he said. “The reality is that for every parent who is not located there will be a permanently orphaned child.”

The government’s lawyer, Scott Stewart, said that the agencies involved would consider appointing a point person or persons. Stewart said the government had proposed a plan with non-profit groups in a prominent role because it believed that was the quickest way to locate parents.

Most of those parents are now in Guatemala or Honduras, according to Lee Gelernt, an attorney for the American Civil Liberties Union, which brought the lawsuit on behalf of the parents.

Non-profit groups and attorneys have been working in Central America to locate the parents. Many of them originally fled to the United States to escape widespread violence at home and immigration advocates have warned the deported parents may go into hiding to protect themselves.

Gelernt said some regions in Central America were too dangerous or too remote for the non-profit workers that were searching for parents.