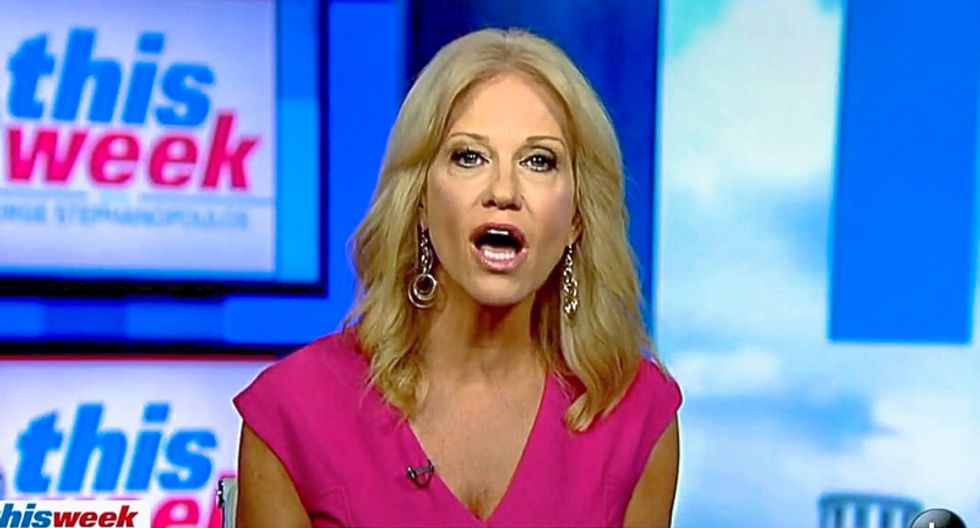 Kellyanne Conway, counselor to President Donald Trump, struggled on Sunday when she was asked to name one prominent black adviser who serves the White House in the West Wing.

During an interview on ABC's This Week program, host Jonathan Karl noted that former White House employee Omarosa Manigault said that she left her job after she began to suspect that the president is racist.

"The first time I heard her suggest those awful things about the president was in this book," Conway opined. "This is somebody that gave a glowing appraisal of Donald Trump the businessman, the star of The Apprentice, the candidate and indeed the president of the United States. She told your own network, Jon, ABC News, the day after she was fired from the White House that she had resigned. Now she's saying that she was fired."

Conway went on to insist that she had never heard Trump "use a racial slur about anyone."

"She says she heard the president use racially-charged language even in the White House," Karl noted.

"Why didn't she tell us at the time?" Conway interrupted.

Karl also attempted to get Conway to explain who Trump was referring to when he described a group of neo-Nazis in Charlottesville "very fine people."

"You're not answering the question," Karl observed after Conway refused to give a straight answer.

"Omarosa was the most prominent high-level African-American serving in the West Wing in President Trump's staff," Karl continued. "Who now is that person?"

"First of all, you're totally not covering the fact that our Secretary of Housing and Urban Development [is Ben Carson]," Conway dodged.

"I'm asking you about the White House staff," Karl pressed.

"The president works with Secretary Carson every day," Conway droned.

"Who is that person?" Karl asked again.

"We have Jeron," Conway said without offering a last name. "He's done a fabulous job and very involved with Jared Kushner and President Trump on prison reform. He's been there from the beginning and he worked with Omarosa."

"Does he have an office in the West Wing?" Karl wondered.

"He has an office in the Executive Office of the President," Conway remarked.

"I didn't say that there wasn't!" Conway exclaimed.

"Who is?" the ABC stated, giving her another shot.

"There are plenty of people," Conway stuttered. "You should look at the fact that we have a number of different minorities."