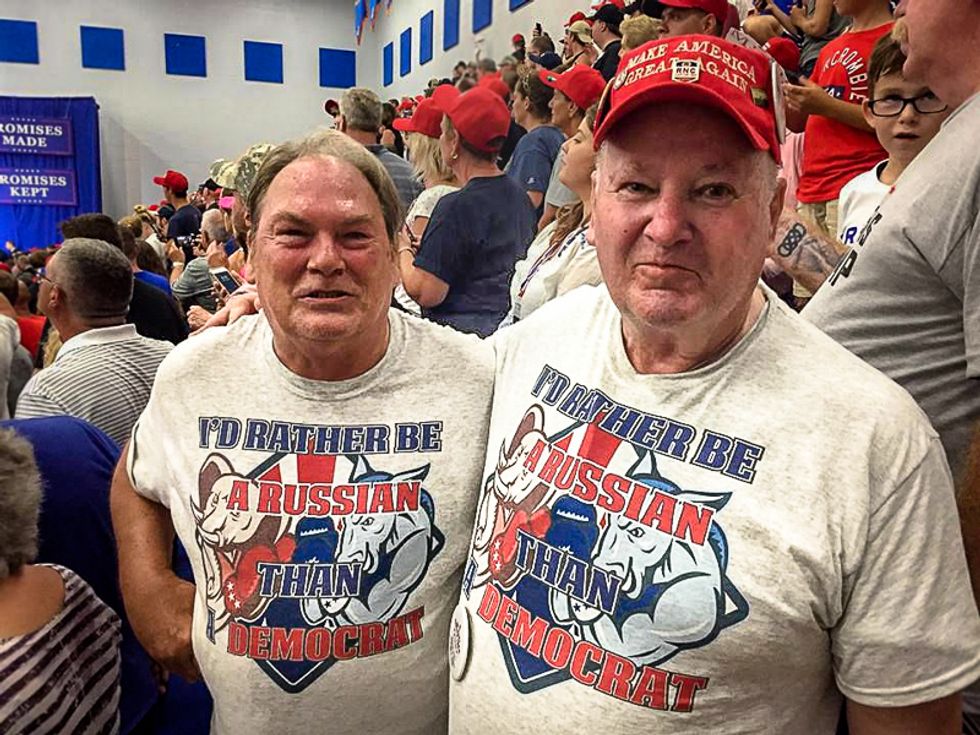 Richard Birchfield and Tim Alicie pose with "I'd Rather Be Russian Than Democrat" shirts in viral photo (Cleaveland.com)

Two supporters of President Donald Trump were invited to speak at a Ku Klux Klan event after they wore pro-Russia shirts to one of the president's rallies.

Earlier this month a Cleveland.com photo of Richard Birchfield and Tim Alicie posing with their "I'd Rather Be Russian Than Democrat" shirts went viral.

This week, the two men told Cleveland.com that they were not "traitors" as many have claimed, and that they are "addicted" to Fox News.

Both men said that they had avoided most of the negative comments about their shirts because they have flip phones and don't use the internet.

According to Birchfield and Alicie, not everyone was critical of their shirts. In fact, they received an invitation to speak at a Columbus meeting of the KKK. But the men turned down the offer.

"I surely don't agree with any of their views," Alicie said.

But Alicie wasn't bothered by having support from the KKK.

"For the most part, they're probably not a hell of a lot different than anybody else," he opined. "But I can't help it that they got a twisted mind the way they think about certain things."

"We're not traitors by any means. And we're not Russian spies or cult leaders," Alicie told the paper, adding that they had embraced being called "Russian hillbillies."

Read the entire column at Cleveland.com.