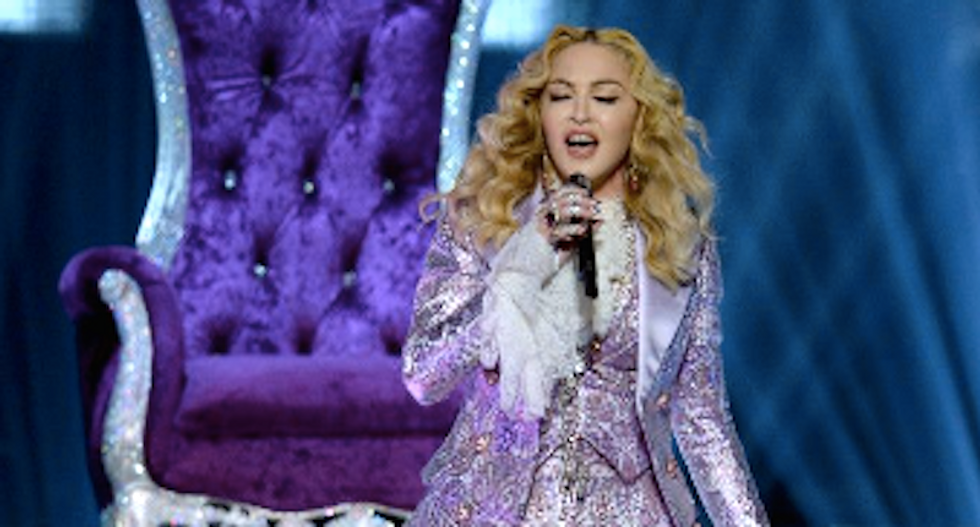 One of the first albums I owned was a tape of Madonna’s 1987 remix collection You Can Dance. I’m not sure where I got it from – and I’m not sure I even liked it – but the bright red cover and Madonna’s hard, direct stare are etched in my mind’s eye even now, 30 years later.

What I know I did like was her previous studio album, True Blue – and especially the title track, which I played on repeat (of course, in the days before CDs, “repeat” meant endlessly rewinding the tape on my Walkman). But it turned out in years to come that what I was really enjoying about that track was what it was riffing on. She fused the rhythms, melodies and harmonies of 1960s pop with the iconic 1980s drum machine sound to create a soundtrack to the Marilyn Monroe look Madonna sported at the time, a look most visible in the video for Material Girl.

This is what Madonna is known for – at best she’s an alchemist, repackaging signifiers from the fringes of popular culture, transforming them into nuggets of commercial gold. At worst – if you believe her critics – she arguably treats popular culture like “one great big pick'n'mix counter”, taking the bits she likes best and somehow making them her own. All the while, she’s a shape-shifting shaman, mutating her own image to accompany whatever soundtrack she’s peddling – whether it’s the 1960s hippy chick style (Ray of Light), the African-American drag scene (Vogue), S&M iconography (Human Nature) or any of the other dozens of iconic looks she’s sported over a 35-year career.

But perhaps the most challenging of her metamorphoses is the one she hasn’t been able to orchestrate completely herself, the one that which we can mark every August 16 – her ageing. “Age is just a number,” we might proclaim (louder as each year passes), or “You’re only as old as you feel.” If we do go as far as setting store by a specific number, then let’s not forget that “life begins at 40” – or even, as has been asserted in recent years, that “60 is the new 40” (I turned 40 recently myself, so this is excellent news).

So what does age mean for Madonna, as she turns 60 this week? Even as long ago as 2005’s Confessions on a Dancefloor, at the tender age of 47, she found herself at odds with the standards of the popular music industry – which often have operated at the intersection of ageism and sexism.

The video for the lead single from the album Hung Up saw Madonna writhing around on a dance studio floor in a pink leotard. This quickly turned out to be ripe for parody: pregnant mums, Naomi Grossman and French & Saunders all had a pop. The parodies themselves are obviously not conclusive evidence of misogyny and ageism in the industry, but we should certainly pay them some heed – given that the video was voted the “least sexy” video of all time in 2009 by music video website Muzu.tv (and reported on with glee by the Daily Telegraph).

And we should certainly start to get worried when we compare them with The Sun’s description of a 64-year-old topless David Hasselhoff as “flashing his honed body”. Or how about The Daily Mail’s reassurance in 2015 that Richard Gere had “still got it” at 65 as he was spotted sunbathing with his 32-year-old girlfriend.

Popular culture points to these men and so many others like them with admiration, framing the visible signs of their ageing as evidence of sophistication, not degeneration. Nobody’s telling them to “put it away”, like (oh, so predictably) the Daily Mail did to Madonna nearly ten years ago.

But Madonna remains visibly physical at 60. She emphasises her body instead of hiding it “gracefully” – in outfits like the one she wore at the Met Gala in 2016, or by spreading her legs for a Louis Vuitton ad in 2009. She sets out to situate herself in a provocative position in popular culture – as has been her trademark ever since Like a Virgin.

Although the Twitter storms of disgust rage on in response to her persistently unapologetic embodiment, there is in turn a backlash against those storms, with The Huffington Post reminding readers that the underlying cause of the discomfort is the lack of potential to commodify the body in question.

Madonna has consistently railed against contemporary taste, battling fiercely on the fronts of race, religion, age, gender and sexuality. In so doing, she paved the way for the likes of Lady Gaga, who will carry the torch as we continue to explore new expressions of identity in all these areas. But Madonna still has the edge, simply because what she’s doing now cannot be done by someone younger.

Freya Jarman, Reader in the Department of Music, University of Liverpool