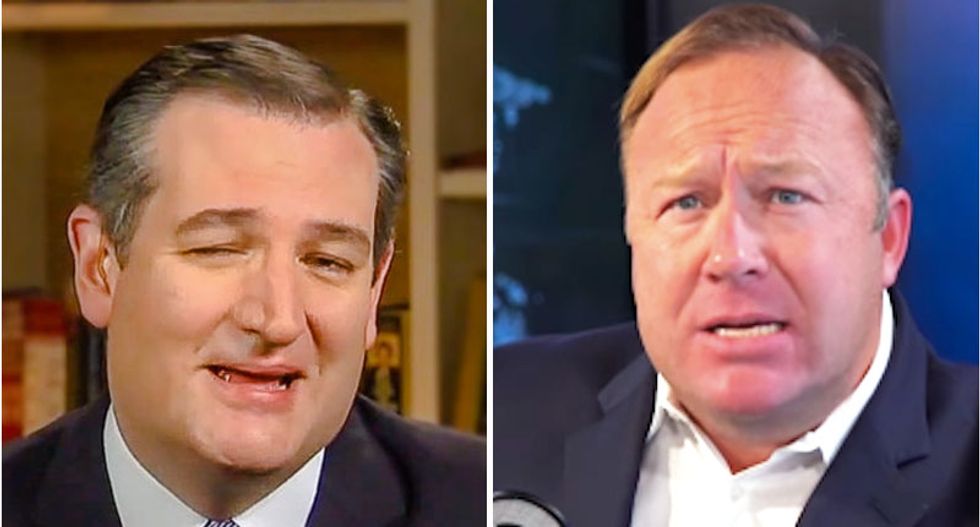 MSNBC's Joe Scarborough blasted Sen. Ted Cruz (R-TX) on Tuesday morning for running to the defense of Infowars founder Alex Jones after the conspiracy theorist had the majority of his social media accounts shuttered.

According to Scarborough, "Some large tech companies have stepped up against Infowars, and a host that not only has made the life of parents whose children were slaughtered at Sandy Hook back in December of 2012, made their lives a living hell, with many having to move from one place to another, and getting threats against their own lives because of lies that he's spreading about them."

Noting Cruz gave an interview on Saturday in Austin, where the Texas Republican said, "As the poem goes, you know, first they came for Alex Jones. That does not end well,” Cruz said, referencing the famous Martin Niemöller poem about the Nazis rounding up Jews, Scarboirough was stunned.

"That somebody like Ted Cruz would come out defending Alex Jones, really repulsive, you know, quoting the first line of a poem, talking about the Holocaust and 'first they came for Alex Jones,' I don't know. Is Ted Cruz, is he familiar with the content in Infowars?" Scarborough asked.

"I would think most of the people he sits in church with would be deeply offended," Scarborough continued. "The content is extraordinarily vulgar. His language, beyond repulsive, and, again, the conspiracy theories. And the suggestion that former FBI directors be assassinated? I mean, everyday it's a new shocking attack against some foundation of our culture, of our civilization -- and Ted Cruz is going out there comparing that to people that were sent away in the Holocaust?"

MSNBC contributor Elise Jordan suggested Cruz was taking Jones' side to shore up his far-right base due to a tough re-election camapign against challenger Beto O'Rourke.

"You got give it to Ted Cruz, just because he does take pandering to new lows," she remarked, before recalling Trump's attacks on Cruz's family during the primaries. "Whether it's his own wife, his own father. He was so quick to, you know, cower back, grovel back to Donald Trump."

"And that's the same thing that he's doing with Alex Jones, and it's so craven, so transparent," she continued. "He cares more about the millions of followers that Alex Jones has and it shows his desperation with his upcoming Senate race and also his complete lack of any moral compass whatsoever."