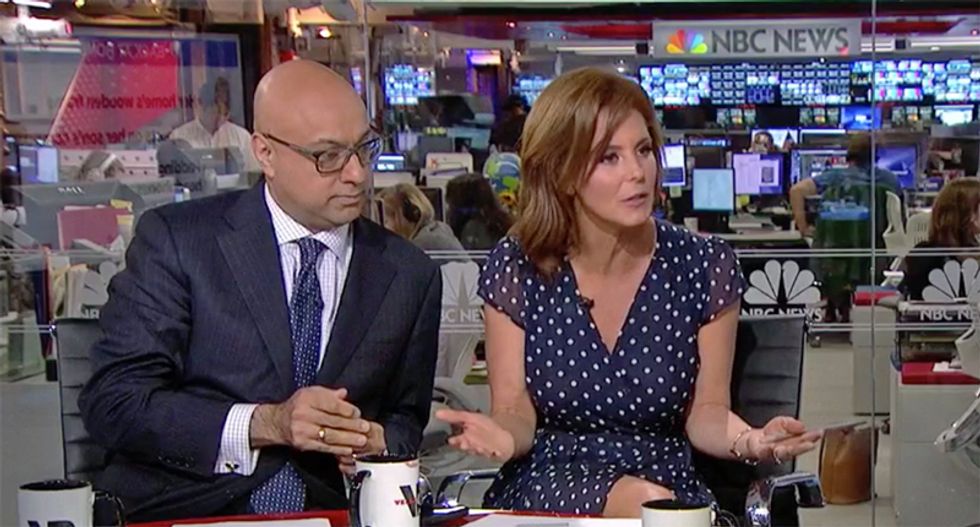 The hosts of MSNBC's Velshi and Ruhle.

Donald Trump supporter and longtime donor in the Koch Brothers network, CEO Dan Eberhart of the fossil fuels drilling-services company Canary was unable to explain why President Trump continues to lie about the economy.

"Dan, you have worked with the Kochs on political issues for quite a while time, is it a good idea to break with the president?" MSNBC anchor Stephanie Ruhle asked.

"I don't think it is, I think they're getting a lot what they want out of the Trump administration and I think on judicial appointments, I think on the tax reform package, I think on regulatory role back, I think Trump is a win-win-win."

"I kind of question their strategy and what exactly they're trying to accomplish here," he added.

"Can I just ask one question? It weighs on me," Ruhle noted. "As it relates, you think the president is doing really well in terms of deregulation and the economy, why is it that he lies about it all the time then?"

"He lies 16 times a day on average, according to brand new fact checking by The Washington Post, which is up from five times on average," co-host Ali Velshi noted.

"He lies. You've got to admit he lies," Velshi added.

"Why does he lie about it since the economy is such a win?" Ruhle asked.

"I think the economy is a win and I think he's pushing," Eberhart replied.

"You're not answering my question," Ruhle interrupted.

"I think he's saying the facts as he sees them and remembers them," Eberhart claimed.

"When you say, 'seeing the facts as he sees them,' that doesn't make sense," Velshi noted.

"Something is either a fact or it's not," he noted.

On Tuesday, Velshi and Ruhle outlined all of Trump’s misleading claims about the economy.