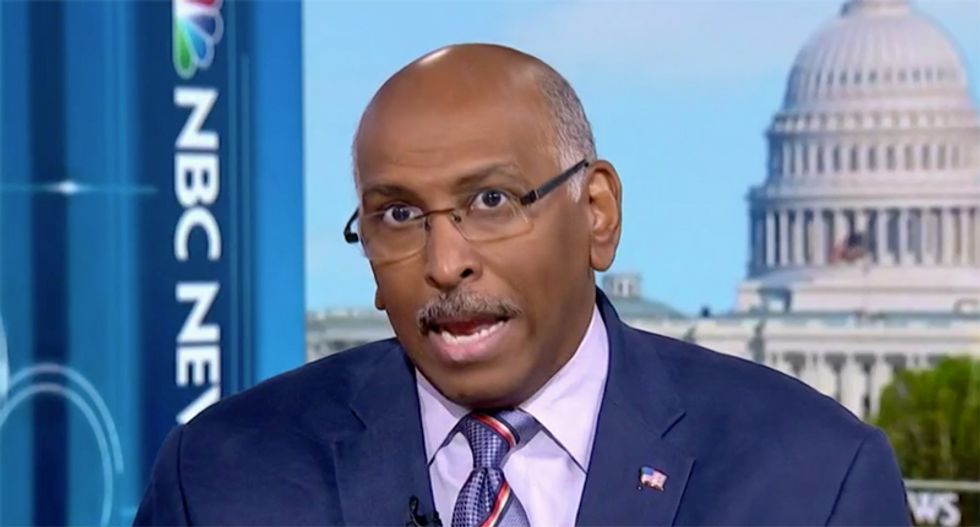 President Donald Trump's combative campaign rallies are successfully firing up his political base, but may do so at the expense of appealing to swing voters, conservative panelists explained on MSNBC's Andrea Mitchell Reports on Friday.

The host introduced the segment by playing a clip from the commander-in-chief's Wilkes-Barre, Pennsylvania speech showing President Trump claiming that critics wanted him to fight Russian President Vladimir Putin.

Are such rallies helping or hurting the Republican Party in the 2018 midterms?

"I think at this point in the midterm campaigns, we have to ask whether or not these rallies and sort of the bizarre dark forces that he's unleashing at these rallies is actually going to work with those swing voters or those soft Republican voters who are going to be determining who controls Congress," explained Charlie Sykes, contributing editor at The Weekly Standard.

The senate race Trump had travelled to Pennsylvania to influence could answer the question.

"The other thing about this, though, was that he was actually doing something for Lou Barletta (R-PA), one of his favorite Republican congressmembers, but that district -- Scranton, that whole area -- that's not the state. Barletta is running against a very popular Democratic senator, Bob Casey (D-PA), and Casey has a long record, his family roots are in that district, but you have to win the suburbs of Philadelphia in that state."

"Michael Steele, as a former Republican chair, you know that's not the way to reach out to the people in the suburbs," Mitchell suggested.

"It is not," the former RNC chair replied.

"Pennsylvania is a bellwether for a number of important races coming up this fall and the fact that the president is so narrowly playing to a base, that he feels good in that setting, he's having fun, he's riffing and cussing and doing all this and those folks are loving it," Steele continued.

"To Charlie's point, the rest of the country -- the independent voters, center/right Democrats and Republicans -- are looking at this and going, 'what is this all about?' There is not an inclination right now, I think, Andrea, to empower that kind of mindset in Washington any longer and that's why you see the numbers for the president dropping."

"That's why you see the generic ballot for Republicans holding on to the Congress moving away from them, it's because of moments like we saw last night," he concluded.

"I think, back to your point about swing voters, I think those swing voters are moving away from the Trump circus and focusing more on the fact that they want something a little bit different, and this ain't it," Steele argued.

"I wonder how many evangelicals and family value folks, however we define that, are worried about the children and are also worried about the fact that we had to bleep the President of the United States at a public rally because of profanity today."