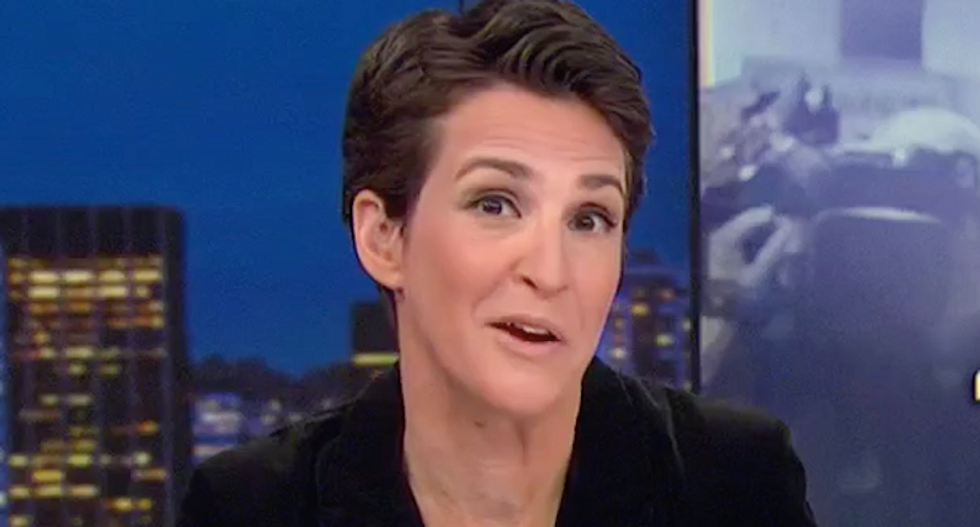 On Monday night, MSNBC's Rachel Maddow got an item off of her Paul Manafort wish list — and as the host noted, it "does not disappoint."

After reporting on the long and winding road that led to the former Trump campaign chairman's name ending up in a Chicago banker's divorce proceedings last week, Maddow waited for a sealed document from the Manafort trial known only as "Exhibit 452."

The piece of evidence, she revealed Monday night, was an email sent from Steven Calk, the owner of a small Chicago bank who appears to have paid Manafort in a bid to become secretary of the Army months after he formally left the campaign in 2016.

The prosecution in Manafort's newly-recessed trial, the host noted, alleged that Calk gave the former campaign chairman $16 million in "loans" from his tiny military bank in exchange for that position. But as the email she read on-air revealed, Calk wasn't just vying to run the Army.

Along with his resume and a list of qualifications that included "loyalty" to Trump following his election, the Chicago banker included a link of other jobs he'd like to have if the Army secretary position were not available to him — as well as a list of his preferred ambassadorships.

Hilariously, Calk's list was titled "Perspective Rolls in the Trump administration in rank order" — a misspelling that caused giddy laughter in the host. Those "rolls," Maddow noted, included Army Secretary, Housing and Urban Development Secretary, and a number of deputy secretary positions in various departments.

"It should be noted Secretary of Education is not on his wish list," Maddow joked. "Nor was ambassador to spelling."