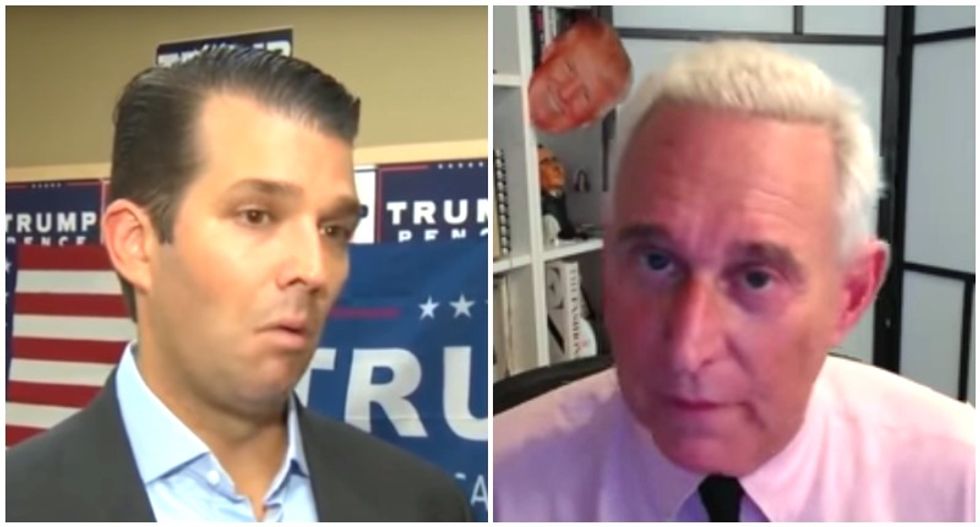 The Republican political operative and longtime associate of President Donald Trump sent out an email asking supporters to help pay for his legal defense, saying he would be indicted in the probe, and he suggested Mueller had the president's son in his sights, reported Haaretz.

“The special counsel is going to charge Donald Trump Jr. with lying to the FBI," Stone said. "Notice they’re not charging him for having an illegal meeting with a Russian at Trump Tower because there’s nothing illegal about that meeting."

The 66-year-old Stone told James Miller of The Political Insider that Mueller would target Trump Jr. for a "process crime" because there was nothing improper about the meeting he attended with the expectation that a Russian attorney would deliver damaging information about Hillary Clinton.

“The only thing illegal about that meeting was how the woman got in the country, how she got a visa from the Obama State Department, and why she was meeting with an official from Fusion GPS before and after the Trump Tower meeting,” Stone said.

Two of Stone's associates -- libertarian activist Andrew Miller and comedian and talk show host Randy Credico -- have been subpoenaed by Mueller to testify before a grand jury.

Miller was found in contempt earlier this month for refusing to appear as a witness, and Credico was ordered to testify Sept. 7.