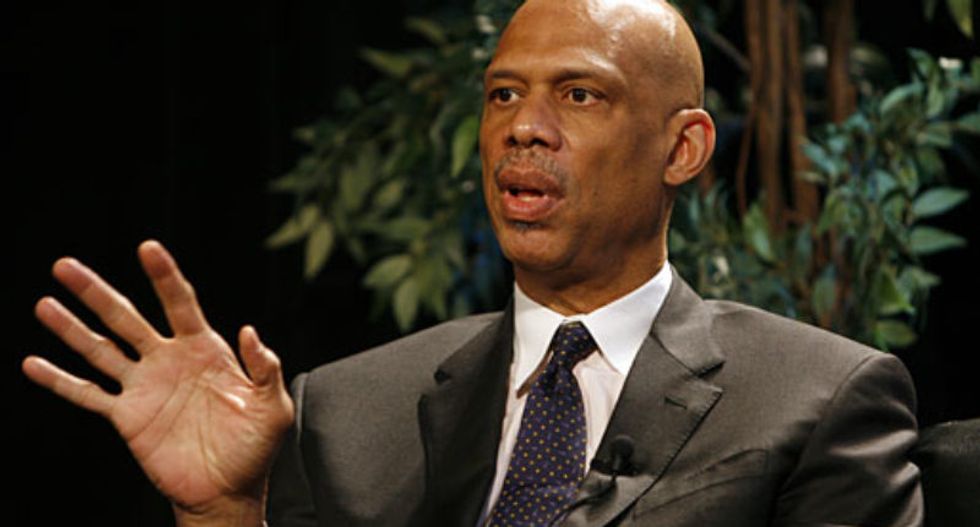 Basketball legend Kareem Abdul-Jabbar compared "The Star-Spangled Banner" to happy songs slaves were forced to sing as they toiled for their masters.

The 71-year-old NBA Hall of Famer published an essay Tuesday in the Hollywood Reporter that called out NFL owners for bowing to President Donald Trump's demand that players stand during the national anthem.

"To the slave owners, singing slaves would drown out their own cruelty and oppression, clothe them in a coerced choir of decency," Abdul-Jabbar wrote. "But it wasn't enough that the slaves had to sing, they had to sing their oppressor's feel-good songs."

Many black and white players have kneeled on field as the anthem is played before games, in silent protest of racism and police brutality, and the NFL has placed on hold a widely criticized policy requiring players to stand or remain in the locker room.

"During a warm-up game on Aug. 10, despite President Trump's previous condemnation, several Eagles players kneeled during the anthem or raised their fists — their way of singing their own song," Abdul-Jabbar wrote. "For them, lyrics like 'land of the free' don't accurately represent the daily reality for people of color. They love their country but want that country to recognize the suffering that occurs when it isn't living up to its constitutional promises."

Trump accused those players of being unable to define the reason for their protests, but the former Los Angeles Lakers center dismissed the president's complaint.

"Who would know better how to define their outrage: the privileged darling of white supremacists, the 94 percent-white team owners, the 75 percent-white head coaches or the 70 percent-black players who actually take the field each week?" he wrote.

"The daily challenge for African-Americans is getting white Americans to listen to their song, especially when it isn't a grinning, grateful or pandering patriotic song," he wrote. "Both movies are about black people finding their voices and then having the courage to use those voices to tell their truths. But will America listen to what they're singing, especially in today's post-truth and 'alternative facts' environment?"