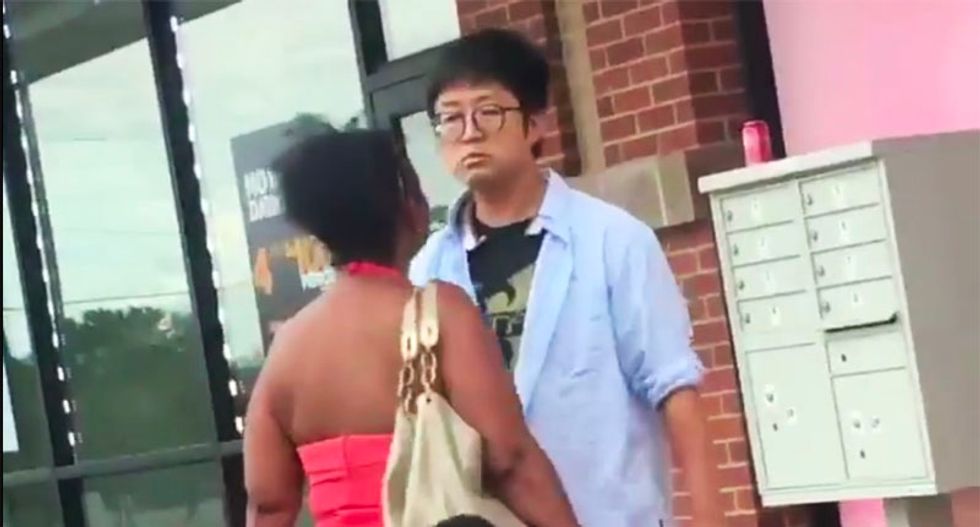 The owner of a Tulsa beauty supply store is facing a boycott after he was filmed punching a black mom in the face after her 3-year-old son walked out of the store with a  keychain.

According to Tulsa World, April Harding was in Jun’s Beauty Supply in Tulsa, Oklahoma and was confronted by the owner, Changseok Jun, who accused her child of stealing.

As the two argued, Harding threw the item back in the store which led to some shoving -- according to a police report -- before Jun punched the woman in the mouth, which was caught on video.

“Mr. Jun followed the victim outside to confront her, and she threw the item back inside the store, then pushed him in his upper torso as she was leaving,” said Tulsa Police Department spokesperson Shane Tuell. “Mr. Jun then punched the woman in the right side of her mouth with his closed fist.”

“We had words and then I attempted to walk away from him,” Hardy explained. “When I did, I did my hand like this, like ‘whatever,’ and when I did, he grabbed my arm and spun me around and punched me in the lip. "

“He didn’t have to do anything that he did. Especially not hit me in my face,” she added, pointing out that she needed 3 stitches in her lip to close the cut.

While Jun was charged with assault and battery -- a misdemeanor -- locals in the neighborhood are still unhappy.

"For him to hit her is unacceptable," Cleo Harris, a protest organizer told the Tulsa World. "You're taking the black dollar, but you don't trust us coming in to buy your product that is a creation of us."

The reports states that the store was closed on Monday while protesters stood outside.

You can watch a video of the incident below via Twitter: