Is Portland the next Charlottesville? City braces for Saturday rally by violent right-wing groups 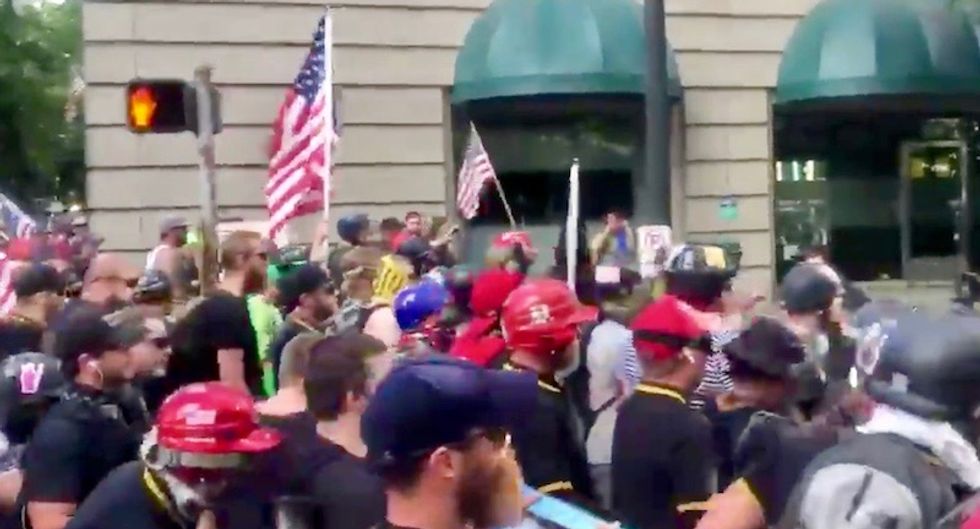 The start of a massive brawl at an alt-right rally in Portland, Oregon, which was declared a riot by police/Screenshot from video by Mike Bivins

After more than a year of right-wing rallies and counter-protests that have ended in violence, this famously liberal city is bracing for an influx of far-right activists outfitted for combat and talking of bringing guns to a political rally here on Saturday, August 4.

Editor’s Note: Check Raw Story for livestreaming from the far-right rally starting at 11:00 a.m. PST, and follow @arunindy on Twitter for regular reports.

Led by Patriot Prayer, a pro-Trump group based in Washington State, right-wing groups will hold a “Freedom March” on Portland’s waterfront near downtown. The rally is taking place days before the one-year anniversary of the “Unite the Right” rally in Charlottesville that led to the death of anti-fascist protester and labor organizer Heather Heyer.

The Southern Poverty Law Center warns the Portland rally may turn into “Another Charlottesville” as right-wing groups declare “this is war” and say they will bring guns to the rally.

Right-wing groups have been emboldened by a June 30 rally in Portland that was declared a riot by police and described as “gang warfare” by reporters. The “Western Chauvinist” Proud Boys have been using images of violence from the riot to encourage members to attend the August 4 rally, saying, “There'll be way more of everything you're looking for in Portland anyways.”

Proud Boys founder Gavin McInnes, a cofounder of Vice Media as well, says, “Fighting is fun. Fighting solves everything.” SPLC notes, “Violence is even built into the structure of the Proud Boys hierarchy.” The highest level of membership, Fourth Degree, “can only be achieved once a member has engaged in violence with antifascists.”

A video expand=1] from the June 30 rally shows scores of right-wing brawlers, including Proud Boys, in protective gear battling a large group of black-clad anti-fascists in the streets. In another clip, a group of right-wingers surround, stomp, and pummel a lone anti-fascist protester on the ground. At least five people were hospitalized, including one with a skull fracture.

In neither clip can Portland police be seen. Numerous reporters and observers fault Portland Mayor Ted Wheeler, who acts as police commissioner, and the police brass for a lackadaisical approach to the street violence. A short expand=1] video from a different rally on June 3 shows fistfights between Patriot Prayer supporters and anti-fascists as riot police stand by without intervening.

The August 4 rally is at least the ninth rally held in Portland by Patriot Prayer, which was formed in 2016 by Joey Gibson, a pro-Trump conservative who is running a longshot campaign for a U.S. Senate seat from Washington State.

At a Patriot Prayer rally in Portland in April 2017, Jeremy Christian, a white supremacist, was caught on tape yelling "Die Muslims" while giving a Nazi salute. He was kicked out of the rally, but a month later Christian allegedly stabbed two men to death on a public train while they were coming to the defense of two Black women, one wearing a hijab, being threatened by him.

Gibson, who is half Japanese, claims he is opposed to white supremacy and Neo-Nazis. However, Alexander Reid Ross, author of Against the Fascist Creep, describes Patriot Prayer as trying to establish itself as a “big tent group for the far fight.” Last year Gibson attended an “anti-Sharia” rally in Seattle organized by ACT for America, an anti-Muslim hate group.

Gibson’s most recent public foray into Portland was on July 24 — the last night of a five-week old protest camp outside of the ICE office and prison in the city. Gibson and a dozen supporters, some wearing body armor and helmets, taunted anti-ICE protesters hours before Portland police swept the camp. Gibson’s crew included Tusitala “Tiny” Toese, a Samoan-American notorious in the region for punching protesters. Toese and another Gibson ally sported “Proud Boy” tattoos on their left arms. One protester from the anti-ICE camp confronted a third member of Gibson’s entourage, claiming he was a Neo-Nazi and pointing at a “Valknut” on his jacket, which is a Norse symbol composed of three interlocking triangles that’s been adopted by white supremacists.

The weapons, body armor, and helmets that are tools of the trade for the right-wing free speech rallies are accompanied by extreme rhetoric. Before the June 30 rally, the Portland chapter of Patriot Prayer vowed in a Facebook post, “the stench-covered and liberal-occupied streets of Portland will be CLEANSED. CLEANSED, I say.”

At the same time, there has been considerable mobilization by groups throughout Portland. Hundreds of anti-fascists are planning to confront the right-wing crowd. Other rallies opposed to the right have been endorsed by the Portland chapter of Democratic Socialists of America, local unions, the Portland Immigrant Rights Coalition, and faith-based groups.

According to The Oregonian, organizers hope an outpouring of counter-protesters will prevent violence this time. Their goal is “to create a broad coalition of progressive Portlanders, union members and social justice activists to augment the presence of the black-clad antifascists, or antifa, who have forcefully confronted Gibson and his followers during their events.”

The wild card is the police response. There is evidence that Portland police are biased toward the right-wing street fighters. Reporter Katie Shepherd uncovered documents stating one police Lieutenant declared “the right-wing protesters were 'much more mainstream' than the left-wing protesters.” On June 30, she overheard police musing about wanting to “restrict the protesters to one area and ‘just let them fight.’”

Last year, during a Patriot Prayer rally held after the train killings that drew thousands of protesters, Portland police failed to intervene when right-wing militiamen policed demonstrators in public spaces. “Tiny” Toese was at the rally and admitted that he picked up a protester and “slammed him into the ground.”Despite Toese’s record of violence at these rallies, a Portland police bureau spokesman told a reporter they weren’t aware of him, adding they were more concerned about antifa.

While Mayor Wheeler is technically in charge of police, he is seen as being deferential toward them. A senior aide to Wheeler admitted last year that everyone in the mayor’s office is "scared" of the Portland police.

The fallout from the June 30 rally appears to have spurred the police to play a more active role this time. They announced, “There will be a significant law enforcement presence in the area of the demonstration due to past threats and acts of violence.” Police added “weapon screening locations will be stationed at entrances to Tom McCall Waterfront Park” where the Patriot Prayer rally will take place.

Because Oregon is an open-carry state, open and concealed carry of loaded firearms are allowed.  Police say they will limit firearms to only those who can“present for inspection a valid Oregon concealed weapons license.”

The night before the rally, in Vancouver, where Joey Gibson and Patriot Prayer are based, Proud Boys have been spotted filtering into town. Photos obtained by The Raw Story show a group of ten, including Toese and an African-American man, smiling at the camera and making a “white power” symbol with their hands. Some wear t-shirts that say “Pinochet Did Nothing Wrong.”

No one knows what to expect tomorrow when the far right, anti-fascists, and the police meet and likely clash.